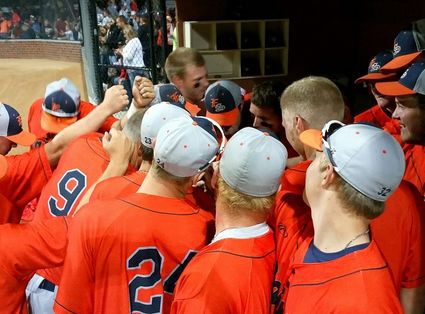 The Saints gather for the post-game huddle in the dugout at Farming.

Elrosa's seventh hit of the game was a memorable one at the Region 15C amateur baseball tournament opener on Friday (Aug. 4) in Farming.

(HD video) Footage from the bottom of the ninth inning on August 4 between Elrosa and Regal in the Region 15C amateur baseball tournament.

Next: Elrosa (21-8) plays in a state-qualifying game at 11 a.m. on Sunday, August 6 in New Munich. The will face the winner of Saturday's game between St. Martin and New Munich. Regal also plays on Sunday, when they compete in an elimination game at 1:30 p.m. in New Munich.

More will be posted on Saturday.

*Update: St. Martin shut out New Munich in their opening-round game. The Martins will square off with Elrosa on Sunday, August 6 in the region's second state-qualifying game of the tournament.