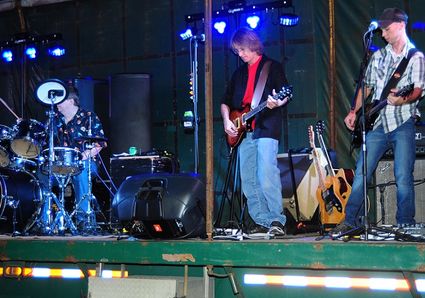 The street dance in Belgrade featured The Hit List on August 11.

Over 650 were served at the Belgrade Firemen's chicken dinner earlier in the evening, and most of those same guests enjoyed taking in the free ice cream social sponsored by the North American State Bank. Also, the B-B-E Area Jaycees held toilet bowl races next to the street dance area and had over 14 teams participate. The toilet bowl races champion was the team of Dawn Rupp and Shelby Anderson.

More coverage to follow this weekend from Belgrade. Also, the August Fest grand parade will be live-streamed at this website and our streaming station < http://citylinktv.com/channel/brooten-bonanza-valley-voice > - just copy and paste that link into a new web browser, and the video player should come up. It will not be active until after 4 p.m., and the time depends on where we set up our equipment along the parade route. Up-to-the-minute updates will be posted at the Jaguar Sports Blog: < http://bbejaguars.blogspot.com >. Following the parade, the Voice will live stream the Belgrade Royal Ambassador program at 5:30 p.m.

Read all about what's going on on page 12A of the August 10 issue of the Bonanza Valley Voice newspaper, featuring sponsor ads from 18 Belgrade-area businesses. Thank you in advance for your support of all of our local businesses who make the newspaper coverage possible! We could not do it without them. We also want to make special mention of the support by the Aug. 10 issue color advertisers: the Belgrade Commercial Club, the Belgrade hardware store, North American State Bank and Prairie View Golf Course.