Storm aftermath across the Bonanza Valley

With school closed, labor was plentiful for cleanup 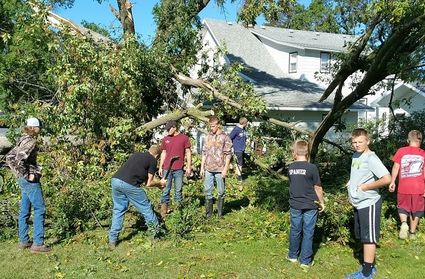 Members of the B-B-E Jaguars wrestling club, including parents and other student volunteers, worked at clean up at various properties. Shown are students clearing up debris from downed trees at the parsonage of the Big Grove/Crow River/Grace Lutheran parish.

With a lack of electricity closing school at Belgrade-Brooten-Elrosa on Wednesday, September 20, labor was plentiful throughout the Bonanza Valley and B-B-E areas to assist with the cleanup in the aftermath of a severe wind/rain storm. The powerful system that brought straight-line winds in some areas surpassing 80 miles an hour tore through the Brooten, Belgrade and Elrosa communities shortly before 1 a.m. Roughly a half- to three-quarters of an inch of rain was reported with the storm.

Numerous farm sites sustained considerable damage across the Bonanza Valley, and one Brooten-area dairy farm lost calves when the calf hutches were blown around the farm site. At a dairy farm near Elrosa, two large silos were totally destroyed, with one getting blown out across the adjacent township road. The Stearns County highway department salt dome on the east side of Belgrade had its roof blown off completely. Through it all, no injuries were reported from the storm and the cleanup.

(HD video) Three individuals clean up downed evergreen trees (not pine trees as incorrectly stated in the video) near Big Grove Lutheran church on the afternoon of Sept. 20.

Cleanup across the area...at 9:15 a.m., members of the Belgrade-Brooten-Elrosa Jaguars wrestling club organized at the high school and then went out to offer their labor to help with cleanup. Parents, friends and other students pitched in as well. This was just one example of the strong turnout of support from youth and adults alike to assist neighbors and businesses with cleanup.

For Thursday, the surplus of youthful labor will all but vanish as classes are set to resume at Belgrade-Brooten-Elrosa District No. 2364.

An additional video from Belgrade can be viewed here at the Bonanza Valley Voice newspaper's Jaguars Sports blog: http://bbejaguars.blogspot.com/2017/09/hd-video-storm-aftermath-in-belgrade.html.

Also, click here to view the initial web article with updates posted throughout the day on Wednesday:http://www.bonanzavalleyvoice.com/story/2017/08/31/bbe/severe-storm-wreaks-havoc-across-bonanza-valley/515.html.