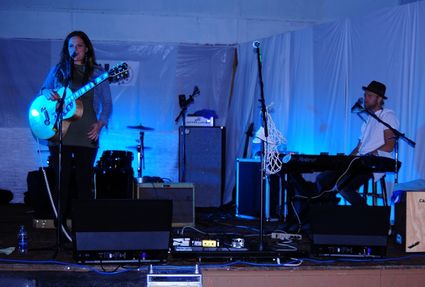 Amanda Watkins and Cal Ecker shown warming up as the band gathers on stage at the Brooten Pavilion on Saturday, October 7.

The Brooten Fire Department's Pavilion dance fundraiser is underway tonight (Saturday, October 7). Everyone is invited to come in and enjoy terrific country music performed by Amanda Watkins and Cal Ecker - straight out of Nashville! The 18-plus dance ends at 12:30 a.m.!

Amanda Watkins posted the following as her biography on Facebook: "Meet Amanda Watkins; born in the wild and wonderful state of West Virginia, and raised in sunny Florida.

Amanda is the quintessential "American Woman" who holds dear a deep-rooted love of family, of country, of singing and songwriting. When she's not writing songs or touring, you'll find Amanda partaking of her other passions - cooking and eating down home cuisine.

She was drawn to music at an early age, and it's been a major part of her life ever since. From singing in church at the age of five, to standing on the hallowed stage before a packed house in Nashville's Ryman Auditorium, Amanda has always delivered powerful performances with her strong voice and gifted melodies and lyrics. One of the proudest moments of her young career was when she became the first unsigned artist to ever play network late night TV, and then share co-write honors on a major Big & Rich single at country radio.

Performing LIVE for audiences is Amanda's first love. She's been privileged to open for major artists like Dierks Bentley, Brad Paisley, Jamey Johnson and Frankie Ballard, and to perform at major music festivals like BamaJam and WEfest, as well as earning the distinction by American Songwriter magazine as delivering one of the top 5 best performances at Bonnaroo."