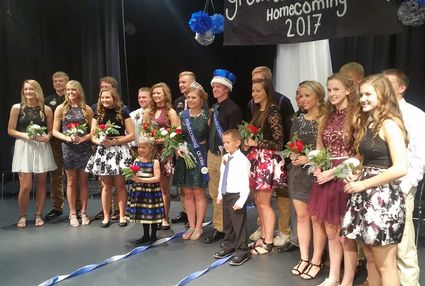 The royal court for the 29th annual B-B-E Homecoming gathers for a group photo.

(HD video) B-B-E's 29th Homecoming King and Queen are named at the coronation ceremony held on Monday, Sept. 25 at the high school auditorium. The king and queen are crowned after the 5:00 mark in the video.

Following two games of "Never Have I Ever" with the underclassmen attendants and then the senior royalty candidates, the 2017 Homecoming King and Queen were named. Kyle Felling and Jaden Gossen were announced as King and Queen, respectively, to oversee the week of the 29th annual Homecoming at Belgrade-Brooten-Elrosa schools.

Homecoming week continues with the Color FUND Run on Wednesday at 1 p.m. followed by the Powder Puff flag football game between the girls of the B-B-E classes of 2018 and 2019. Additional Homecoming coverage was published in the Sept. 21 issue of the Bonanza Valley Voice newspaper, with more coverage coming in the Sept. 28 issue of the Voice.

Cheryl Kampsen with Kampsen Kreations provided her outstanding services with professional photos of the royal court and coronation ceremony. Thank you, Cheryl!!

*At 22:23 on Monday, a new video was embedded featuring the entire coronation ceremony.