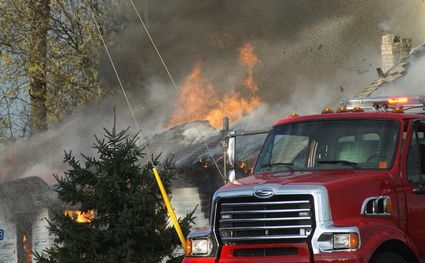 The Brooten and Elrosa fire departments were on the scene shortly after 5 o'clock on Sunday, October 15.

While no loss of life has been reported, a two-alarm fire north of Brooten on Sunday, October 15 claimed a rural Brooten home. The fire call went out around 5 p.m., and both the Brooten and Elrosa fire departments responded along with the Glacial Ridge Ambulance service. By 6 p.m., the fire was out but the departments still had plenty of work to do putting out the smoke and any potential flare-ups.

A full story will be posted on Monday morning, October 16, following the release of the Stearns County sheriff's department report.

*Update on Monday morning: as of 09:00, no report has been released. The house that burned down was occupied by Dick Imdieke, but the Voice cannot confirm who was in the house at the time of the fire. More details TBA at a later time.

Upon arriving responding units found the structure to be fully engulfed. Deputies made contact with the resident, Dick Imdieke, 80, of Brooten. Imdieke had significant burns to his hands and head. Imdieke told deputies that he smelled gas when he returned home and he began cooking supper. A short while later there was an explosion. Imdieke was helped to a nearby residence by a neighbor who called 911. He was the only one in the residence at the time. Imdieke was transported to the Glacial Ridge Hospital in Glenwood with non life threatening burns. The cause of the fire is under investigation by the Minnesota State Fire Marshall's Office. The Stearns County Sheriff's Office and Brooten Fire Department were assisted by Elrosa Fire Department, Glacial Ridge Ambulance of Brooten and Glenwood as well as the Minnesota State Fire Marshall.

(HD video) Brooten and Elrosa fire department crews on the scene of the October 15 house fire north of Brooten.