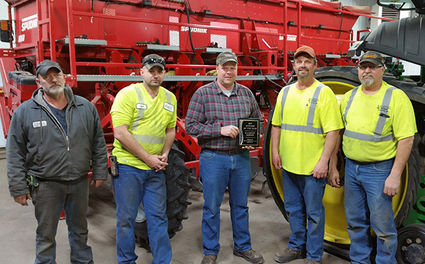 Members of the Brooten Commercial Club have named R.D. Offutt Company, Brooten Farm, as the 2017 Business of the Year.

R.D. Offutt, known commonly as RDO or Offutt Farms, is entering its 54th year of doing business. They are a six-generation, family-owned business. Since 1990, Offutt Farms has operated out of Brooten after they purchased Kay Farms potato company. The company headquarters is in Fargo, ND.

Offutt Farms' Brooten warehouse, located at near Offutt Farms' local office three miles northwest of Brooten off of Highway 55, was built in 1979 by Harry Kay. Kay, who passed away in 1984, was owner of Kay Farms potato company. At the time of its construction, it was the most modern potato storage facility in Minnesota, able to safely store potatoes for one year under controlled temperature and humidity conditions while being fully monitored.

Chris Strom is the local manager of what the company refers to simply as the "Brooten Farm" with a full-time, year-round team of five employees.

Strom, a 1994 graduate of Belgrade-Brooten-Elrosa schools, is a native of Brooten.

"I've worked with Offutt Farms since I was in high school," said Strom, who is a proud supporter of B-B-E activities and the local communities. "I've been with them over 25 years now. I started helping with irrigation maintenance, and then I worked in the warehouse. Now I run the local operation we call the Brooten Farm."

Offutt Farms' Brooten farm runs up to 15 full-time employees through the summer months as the local potato-growing season ramps up. During harvest time, they employ up to 75 employees when they run multiple potato harvesters.

"During planting time, we have about 25 employees," said Strom.

"Those two, along with my full-time mechanics and field men, are what make our Brooten operation so successful," added Strom.

Locally Offutt Farms runs 2,000 to 2,100 acres of potatoes. Of that, the company owns about 1,700 acres with the balance leased from local farmers.

"The local farmers like working with our rotation. We trade ground year to year. You have potatoes one year, then up to three crops over a three-year period before going back to potatoes. Generally corn and soybeans fill the rotation, but sometimes peas are thrown in."

The company prefers to have potatoes follow soybeans, which set up the soil well and leave a minimum amount of crop residue.

"We like being on irrigated ground. Potatoes should be planted around May 1, after a threat of frost has passed. For our early varieties, we start lifting in late August, and that continues into September," said Strom.

Just as it has in general in agriculture, technology has completely changed the face of the Offutt Farms operation, according to Strom.

"Our irrigators constantly communicate with my cell phone. The warehouse ventilation is connected to my phone. The tractors are all connected. We can track their locations, fuel consumption and speed. It's very impressive."

Competition in the industry is fierce, Strom noted.

"It used to be that corn trash could be sorted out at the plant, but today they view it as hazardous trash. We have to have it cleaned out by hand in our warehouse, which can be a very labor-demanding job."

Smaller potatoes not fit for French fries are sent to Northern Potato company in Chaska. Simplicity-brand hash browns and mashed potatoes are the end product at that plant. 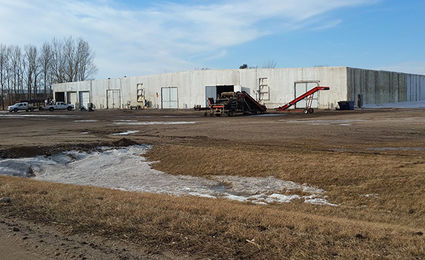 The RDO Offutt Farms' Brooten warehouse has eight bins each with a capacity of 65,000 hundredweights of potatoes.

Most of the company's Brooten-area potatoes go to a French fry plant in Park Rapids, where fries are manufactured for companies such as Wendy's, McDonalds and the Great Value Wal-Mart brand.

"The fries you get at the Chuckwagon in Brooten are from Lamb Weston, which uses our potatoes," said Strom.

"They treat the local towns well. We utilize the Belgrade Coop, get fuel from Fauskee Oil and contract with Schroeder Trucking, auto parts and mechanic work with Brooten Auto, just to name a few local companies. We could find larger outfits to work with and maybe get cheaper rates, but we don't want to go that route. We get great customer service locally and will continue those partnerships."