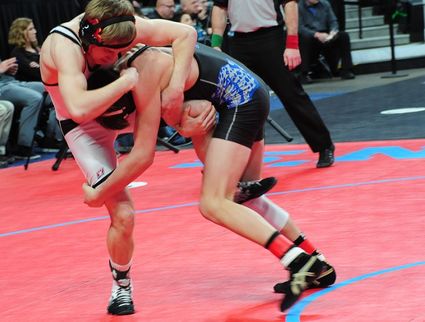 Tyler Bents is shown earning a takedown to forge a 3-0 lead in the third-place match.

It's been a busy day of wrestling at the Xcel Energy Center in St. Paul for members of the Belgrade-Brooten-Elrosa Jaguars wrestling team!

At 113 pounds today...eighth-grader Blaine Fischer was defeated by sophomore Trevor Janssen of Blackduck/Cass Lake-Bena (35-12) by a 9-5 decision in the state semifinals. Then in the wrestlebacks, Fischer was pinned (4:01) by freshmen Carter Jonsagaard (34-13) of Lewiston-Altura/Rushford-Peterson. In the fifth-place match, Fischer was defeated by a 17-2 technical fall (4:13) by senior Michael Miller (46-4) of Frazee. Fischer finished with a stellar record of 40-16.

At 132 pounds today...junior Tyler Bents was defeated in the state semifinals in a 6-3 decision by junior Mark Buringa (41-5) of St. Charles. He then faced junior Teddy Pesch (31-11) of Minneota in the consolation bracket. Bents had a strong showing and won a 9-1 decision to advance to the third-place match. Tonight in the third-place match, Bents faced senior Nate Hart (47-3) of Ottertail Central. Bents had another fine performance on the mat and came away with a win by a 5-2 decision to claim the bronze medal. Bents finishes his junior season and fourth trip to the state tournament with a 46-8 overall record.

More updates to follow after the championship matches are wrestled! GO JAGUARS!

*UPDATE: catch the results of the state championships at the newspaper's Jaguars sports blog: http://bbejaguars.blogspot.com/2018/03/state-championship-round.html.