"It is for freedom that Christ has set us free" 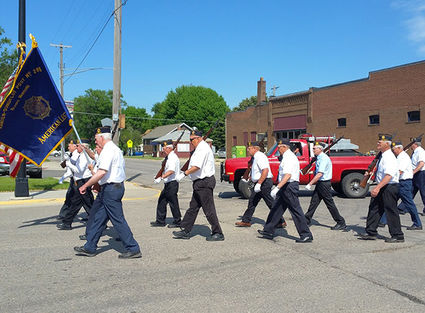 "It is for freedom that Christ has set us free."

The apostle Paul wrote those words to the young church in Galatia, as written in the Book of Galatians, Chapter 5, Verse 1.

A little further on, he continues his thought and says to them, "Yes, it is for freedom. But don't use your freedom to just go out there and sin."

What he's saying is, "Don't blow it!" Don't go out and dishonor this gift that you've been given.

There was a tremendous price paid for this gift. Honor it. Live in such a way that you honor the sacrifice that was made for you.

Abraham Lincoln, in his Gettysburg Address, spoke of the sacrifice of so many as they gave, in his words, "The last whole measure of their devotion."

You can read the full transcription of Pastor Krasky's speech, refer to the May 31 issue of the Bonanza Valley Voice newspaper.

(HD video) The full Memorial Day program, hosted by the Brooten American Legion, on May 28, 2018 at Memorial Park.

Jacobson said, "I want to add a couple minutes to our program today. I, and many others, have been in this Legion for 60-plus years. It has never been said, but today, you have an opportunity to look at the faces. They all served. And probably, some of you out here in the crowd have also served. If you look over at our ladies in the Auxiliary, they were all pretty young back at that time. They waited for their husbands and their loved ones to come back. I want you to heartily applaud these who are living in front of you, and thank them, for a job well done."

The program concluded with the firing of the gun salute followed by Tony Sanders playing Taps.