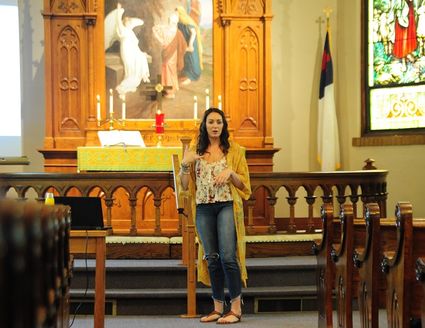 The Belgrade-Brooten-Elrosa Ecumenical worship service was held on June 13 at Big Grove Lutheran church. In addition to singing music selections and reading Bible verses, worshipers listened to a 35-plus minute long talk by a victim's advocate who works in central Minnesota with abused women, children and victims of sex trafficking. Following worship, refreshments were provided by St. Francis de Sales Catholic church.

(VIDEO) This is best viewed with a traditional computer that has external speakers.

NOTE: in the video, the speaker can be heard giving a number of tips and hints that members of the public can watch for in order to identify victims of sex trafficking. Due to time constraints, a feature story in the Bonanza Valley Voice newspaper was not published in the June 21 issue. What was published was a short caption describing the event as well as a picture of the keynote speaker (page 8, June 21 issue). The newspaper staff is working overtime to get something in an upcoming newspaper issue. The topic is not only one that pins your ears back, but it also is one that dovetails into the world of drug pushing and violent crimes that can often go along with that territory.

See part of her speech, which includes a question-and-answer session at the end, in the video posted below.