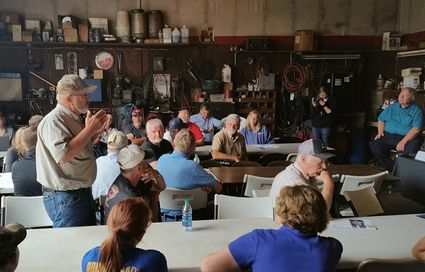 Over 50 people attended a rural dairy discussion on June 12 in rural Roscoe that was organized by Minnesota Farmers Union. Farmers and other concerned citizens from across central Minnesota spoke for over an hour and a half on the price crisis facing the dairy industry.

A panel took notes and provided their input at the end. The panel was made of MFU president Gary Wertish, Minnesota Department of Agriculture assistant commissioner Andrea Vaubel and National Farmers Union vice president Patty Edelburg. Edelburg's family are dairy farmers in Wisconsin.

What was offered ran the full circle of ideas about what is causing record-low prices for fluid milk sold by dairy farmers relative to their ever-increasing input costs. They included problems with government policy, the policies of individual coops that purchase milk, the use of immigrant labor on large dairy farms, the introduction of a quota-style (for and against) as well as concerns about suicide among farmers and the stresses that bad economics are placing on farm families.

Joe Borgerding, an organic dairy farmer from Belgrade, spoke about the impact of large dairies on the industry and their heavy reliance on immigrant labor. Most of what he said can be heard in the video embedded on this web article.

"When we talk about the large-scale dairies, there's a social cost that's not being paid," said Borgerding. "The small producers feel that. Our communities are going to empty out if we lose half our farmers again. You won't have a local dairy supply, a feed store or a local veteranarian. You're going to have to travel for that. The big guys can afford to bring that all in, and they'll spend the whole day there. If we lose half our neighbors, your vet's going to be twice as far away. We need to protect our local farms. We have to step up and do it. We have coops whose farmers produce our milk and they process it. They're telling the little farmers that they can't expand because of the bigger dairies."

As a counter point, this December 2016 article in the Morris Sun-Tribune newspaper states that Riverview must prove to the federal government that no employees in the U.S. are available to take those unskilled jobs to be filled by immigrant labor. https://www.stevenscountytimes.com/news/4173697-riverview-finds-employees-immigrants.

The Immigration and Nationality Act requires that the hiring of a foreign worker will not adversely affect the wages and working conditions of U.S. workers comparably employed. To comply with the statute, the Department of Labor's regulations require that the wages offered to a foreign worker must be the prevailing wage rate for the occupational classification in the area of employment. As such, Riverview Dairy must attest that, it will pay no less than (a) the actual wage level paid to all other individuals at the work site with similar experience and qualifications, and (b) the prevailing wage for the occupational classification in the area of intended employment.

Joe Borgerding of Belgrade speaks about immigration and his thoughts on how it relates to the issues facing Minnesota's dairy industry.

Factors yet to study in Swift, Stevens and Kandiyohi counties are what benefits the local communities receive from the larger dairies of Riverview, LLP. Does the presence of a large dairy allow other agriculture-related businesses to sustain themselves? Does the presence of large dairies bring an influx of families with children, which in turn can help populate the schools of Kerkhoven-Murdock-Sunburg, Benson, Morris Area, Hancock, Chokio-Alberta, Lac qui Parle Valley and others. (Not to mention the network of churches still in operation throughout the area.) From current enrollment data, the schools of Hancock and K-M-S are growing, Morris Area is stable, and only LQPV and Benson have been in a downward spiral in recent years.

These are difficult questions to answer, given the massive difference in size and economics between a 50- or 100-cow dairy farm and an 8,850-cow dairy facility.