Bonanza Valley Days 2018! Something for everyone! 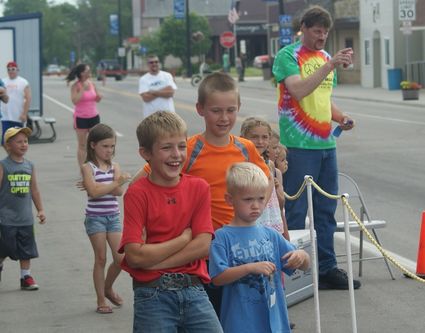 Shown is a photo from the 2015 BVD kids pedal pull. The late Rick Thonvold, who passed away in March 2016, can be seen in the background.

**Note: this web article will be updated on Friday, July 13 with a summary of information about food options over the weekend. Please note that the KaDe Shack will serve a crazy delicious breakfast buffet on Saturday from 6 to 11 a.m.; the cost is just $8, and they'll have scrambled eggs, fried potatoes, ham, pancakes, French toast, bacon, sausage, biscuits & gravy. Children ages 10 and under are $5. Also, the KaDe Shack will not have breakfast on Sunday, as the owners encourage everyone to support the Boy Scouts at their Dads Belgian Waffles. (See more below.) *Other food options: the B-B-E wrestling club will serve hamburgers and other food on Saturday at the street dance. Kettle Corn and mini-donuts will be for sale at both street dances (Friday and Saturday nights)...the Anderson family of Belgrade will serve a wide selection of food on Saturday near city hall. And at the city park, the Sedan Fire Department will serve hamburgers during the softball games and flea market. Pork Chops on a stick will also be available there.

With the theme "80s Rock Scene in 2018 - We Built This City on Rock and Roll", the schedule actually kicks off on Thursday night this week with a non-denominational worship in the city park service led by Father David Grundman. (Bring your own lawn chairs.)

City-wide garage sales, with the lists printed in the Bonanza Valley Voice newspaper leading up to that weekend, will be held on Friday and Saturday. Also covering both days will be the Briggs and Motley Flea Market at the city park near the Brooten Pavilion, from 4 to 8 p.m. on Friday and 9 a.m. to 2 p.m on Saturday. The B-B-E boys' basketball program will host a two-day 3-on-3 basketball tournament with the adult division on Friday and youth division on Saturday at the elementary school gymnasiums. Also, the Red Hen House Retreat Center will host an art show on both Friday and Saturday.

The BVD elementary baseball tournament begins at 9 a.m. and will be held at the Quisberg Park, city park and elementary school diamonds. The second annual Red Hen House art show is from 4 to 8 p.m. on Friday (241 Central Avenue South). Prairie View Golf Course will host couple's golf at 6 p.m.

The always-popular Brooten Firemen's chicken BBQ will be held at the city park. The Nite Owls band from Sauk Centre will provide live music in the gazebo. This is a fundraiser in support of the Brooten Fire Dept. Relief Association with prices of $8 or $9.50 for quarter or half chicken meals that include potato salad, beans, pickles, bun and beverage.

Gig Noonan, sponsored by Custom Duct, will provide live entertainment at the Brooten Pavilion from 7 to 11 p.m.

Finally, a street dance on main street will start at 8:30 p.m., with music provided by Dee Jay Sounds of Belgrade.

A men's slow-pitch tournament kicks off a full day of activities on Saturday starting at 8 a.m., with games held at the city park diamond.

The BVD car and tractor show, which has grown to include over 50 exhibits, will be on main street from 8 a.m. to 1 p.m. It is sponsored by Don's Auto Sales, Clausen Auto Body and Glass, Brooten Diesel, JF Auto Repair, the Sedan Fire Department and Offutt Farms. CM Rock DeeJay of St. Cloud, sponsored by Schroeder Transfer, will provide music on main street during the car and tractor show.

The B-B-E wrestling club is again spearheading the Walk/Run event. It begins at 8:30 a.m. at the old high school lot in the center of town. Starting at 9 a.m., the BVD Sand Volleyball tournament begins at the sand volleyball nets by the Brooten Pavilion.

The nine-hole Gary Fauskee Scholarship Cup tournaments will be hosted at Prairie View Golf Course. The first tournament starts at 9 a.m., and the second tournament will begin at noon.

From 9:30 to 11 a.m., Stearns County Dairy Princesses will serve free milk and cookies at the city park.

The Little Miss Brooten and Miss Brooten royalty and candidates will hold a car wash fundraiser at the Bonanza Valley State Bank parking lot from 10 a.m. to noon (free-will donation).

The kiddie parade, sponsored by Bollig Engineering, Inc., is at 10 a.m. and starts on the west side of Trinity Lutheran Church and heads west down Hatton Street.

From 10:30 a.m. to 4 p.m., the B-B-E/Paynesville Pirouttes dance team will hold a dunking booth fundraiser on main street.

Two popular activities start at 1 p.m., including the kids' water ball fight on main street (south of Hatton Street) plus pony rides at the city park. Also, a petting zoo at the city park runs from 1:30 to 3:30 p.m.

The Brooten Commercial Club will hold Bar Bingo at the KaDe Shack at 1:30 p.m. The Commercial Club is also excited to host the Nite Owls that afternoon, as they perform on main street from 2 to 4 p.m.

A kids' pedal tractor pull in memory of Rick Thonvold begins at 4 p.m. on main street next to the KaDe Shack. Spectators are asked to bring lawn chairs if they wish. This is sponsored by Viking Office Supply and Brooten Auto. Thonvold, who passed away in March 2016, was a huge supporter of this event and is still dearly missed by the Brooten community.

The B-B-E Area Jaycees will hold a bean bag tournament on the south end of main street (north of Highway 55) with registration beginning at 5:30 p.m. They hope to get the tournament underway by 6 p.m. to get it wrapped up in time for the street dance. Registration will be capped at a certain number of teams, with details TBA.

Finally, a street dance featuring the local Sedan/Terrace-area based band "Wasted Time" will begin at 8:30 p.m. on main street. This street dance is sponsored by the Brooten Commercial Club and the KaDe Shack. Food stands will open at 9 p.m. to offer good eats during the dance!

The third day of Bonanza Valley Days begins with the Dads Belgian Waffles breakfast at the Brooten city park, a fundraiser for the B-B-E Boy Scouts Troop No. 667. The breakfast will be served from 8 a.m. to noon. The afternoon brings a great culmination to the weekend of activities with the Grand Day Parade at 1:30 p.m. It will start at the north end of Main Street and then loop into the south part of town before finishing up near the Brooten Pavilion. Registration for the parade can be done by calling city hall at 320-346-2524. Following the parade, Bonanza Valley State Bank will host an ice cream social at the Brooten Pavilion.