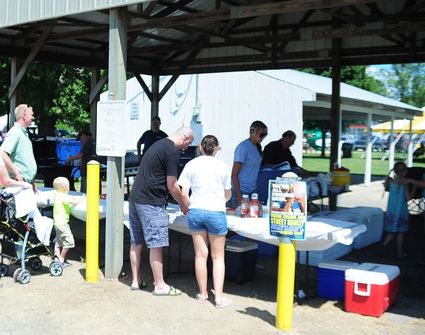 The Sedan Fire Department set up at the city park on Saturday of Bonanza Valley Days in 2017.

Rest assured, you won't go hungry while enjoying the weekend in Brooten at the annual Bonanza Valley Days celebration!

On Friday, be sure to take in the Brooten Fire Department chicken BBQ feed at the city park from 5 to 8 p.m. They are geared up to serve over 800 people - let's make it happen! The Nite Owls will also be providing live music entertainment. Earlier in the day, you can also grab a burger, chicken or other great food at the KaDe Shack until 5 o'clock, when they'll close their kitchen and send folks to the city park for the BBQ feed.

A terrific mini donuts stand will be set up at the north end of main street on both Friday and Saturday nights! They'll begin serving on Friday at about 6 o'clock and serve "until the street sweeper comes out" or approximately that point near the end of the street dance. On Saturday, they will begin serving mid-morning on main street and will go a full day until the end of the Wasted Time street dance. In addition to mini donuts, they will serve German franks, caramel apples and cheesy nachos.

Saturday brings a wide variety of food options. You won't want to miss the breakfast buffet at the KaDe Shack that runs from 6 a.m. to 11 a.m. Also Saturday morning, the B-B-E Knights of Columbus will serve ice cream/root beer floats for $2 starting at 9 a.m. on main street in downtown Brooten, mostly to coincide with the car and tractor show.

Pork chops on a stick will be for sale during the Briggs and Motley flea market at the city park, which runs from 9 a.m. to 2 p.m. Starting about mid-morning at the city park, the Sedan Fire Department and First Responders will serve hamburgers for visitors to the softball tournament games and the flea market. They will serve into the afternoon!

Hot dogs off the grill will be for sale at the second annual vintage snowmobile show that runs from 10 a.m. to 1 p.m. at the old high school lot in the center of town.

The Arlen Anderson family will set up and serve great hot food near city hall in downtown Brooten starting around 5 p.m. on Saturday night. They will serve into the night as the street dance with Wasted Time heats up. Also on Saturday night, the B-B-E Wrestling Club will be serving hot food next to the KaDe Shack.

And last but not least! Marcia's Bar and Grill will be serving freshly-made pizzas during their afternoon and evening hours. Also, you can get a wide variety of food at RJs Mini Mart...they start making breakfast items at 5:30 a.m.! (Every day of the week!) By mid-morning they get going on hamburgers, chicken, fries, pizza and other great entrees and will be making hot food items until 10 p.m. and possibly later depending on demand at that point. 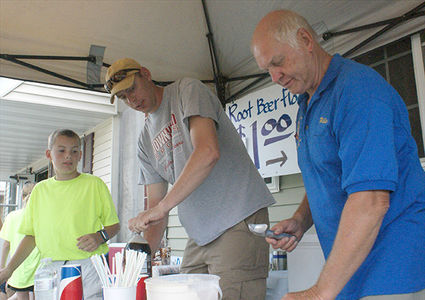 On Sunday, don't forget the Dads Belgian Waffles fundraiser, hosted by the B-B-E Boy Scouts Troop No. 667, from 8 a.m. to noon at the city park. They like to serve between 400 and 450 people (or more)...so once again, let's make it happen!! (Dads Belgian Waffles will be equipped to handle a large crowd.) The B-B-E Boy Scouts is an awesome group who does countless service projects and events throughout the year.

Also, the mini donut stand will be open for business by 1 o'clock in the afternoon (possibly earlier) and will stay open until after the grand parade is done.

So come hungry to Brooten - and leave happy!