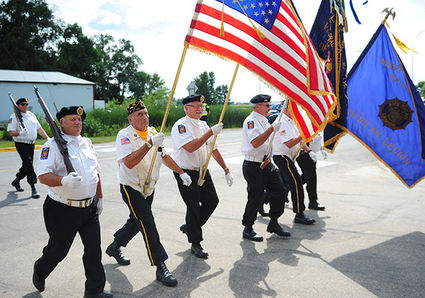 Members of the Belgrade V.F.W. lead the August Fest parade in 2017.

The Belgrade Commercial Club is excited to announce a full schedule of events for the annual Belgrade August Fest celebration coming to town on Friday and Saturday, August 10-11. The weekend is possible in large part thanks to strong financial support from the Belgrade Lions Club, a major sponsor for August Fest that pays for the kids' inflatables, prizes for the kids and the fireworks. This funding allows various school and community groups to staff the games and rides and raise funds for themselves.

A fun event takes place a couple days before the traditional start of August Fest, with Gig Noonan highlighting a Concert in the Park on Wednesday, August 8 at 6:30 p.m. The public is encouraged to bring their own lawn chairs, as this concert will be staged on the north end of the Belgrade city park. This event is sponsored by the Belgrade Co-op, Belgrade Steel Tank and CMCU.

Friday kicks off with chicken!...A handful of events take place on Friday, starting with the Belgrade Fire and Rescue chicken dinner from 4:30 p.m. to 7:30 p.m., hosted outside the Belgrade V.F.W. Post 1825. Advance tickets are $8 and can be purchased from any member. Tickets are $9 at the door. Local entertainment will perform on the stage during the chicken feed.

Next is the adult division of the Three-On-Three basketball tournament held in memory of Austin Young. Registration starts at 5 p.m. at the B-B-E high school, and contact Dave Kaiser with any questions at 651-263-4291. The action begins at 6 p.m.

Back by popular demand is toilet bowl races, this year on Friday night. The Belgrade-Brooten-Elrosa Jaycees will host this year's toilet bowl races outside the V.F.W., with registration starting at 7 p.m. Cost is $10 per team, and action starts at 7:30 p.m. Payout will depend on participation, and contact Angie Lecher with any questions in advance.

Friday wraps up with the street dance featuring Revel at the V.F.W. from 8:30 p.m. to 12:30 p.m. This is a free street dance sponsored by the Belgrade V.F.W.

Saturday - a long, full list of activities! Saturday starts with Dad's Belgian Waffles at the St. Francis de Sales parish center from 9 a.m. to noon **Note: time changed from earlier reports!! This event is hosted by the B-B-E Boy Scouts Troop 667, with proceeds going towards various important local Boy Scouts causes. Cost is $8 for adults and $6 for kids ages 3-12.

The Youth Three-on-Three basketball tournament in memory of Austin Young will be at 8 a.m., with registration at 7 a.m. at the high school. Contact Dave Kaiser with any question. Registration information will be published in the August 2 and August 9 issues of the Bonanza Valley Voice newspaper.

The B-B-E Post Prom will host a 5K Fun Run/Walk at 8:30 a.m. at the high school. Cost is $20 which guarantees you a t-shirt with pre-registration. Water and snacks will be available following the race. Contact Heather Goodall with questions.

From 9 a.m. to 4 p.m., the Belgrade Reader's Club will host a quilt show at the municipal hall.

Also starting at 9 a.m., and running to 1 p.m., is the August Fest Car Show featuring cars, trucks and tractors. Prizes will be given out, and registration will take place that morning.

The B-B-E Knights of Columbus will have a root beer float stand on main street from 9 a.m. to 3 p.m.

One big highlight of Saturday that will be sure to be a hit will be kids games and inflatables from 10 a.m. to 3 p.m. These events are sponsored by the Belgrade Lions Club, and proceeds will go towards various groups assisting. Prizes will be given out to all kids who participate.

From 10 to 11 a.m., Barbara Lent from the Red Hen House Retreat Center in Brooten will have a quilter's demonstration on the little stage on main street; this is sponsored by the Belgrade Reader's Club.

The Belgrade-Brooten-Elrosa Jaguars wrestling club will have a food stand opening at 10:30 a.m. and running until midnight on main street.

At 11 a.m., the city planter winner will be announced on the little stage; this is sponsored by the Rosebud Garden Club.

The B-B-E/Paynesville Pirouettes dance team and Mini Pirouettes will perform at 11:30 a.m. outside the city hall office. This event is another huge draw for families to main street.

Around 1 p.m., Solitary Man Dennis Anderson will perform on the little stage; he is sponsored by the Belgrade Commercial Club.

Back by popular demand, the Belgrade August Fest Tug-Of-War will be at 1 p.m. at the gravel lot south of the L and L Foods building. If not pre-registered, registration will start at 12:30 p.m. Further details will be announced in the newspaper.

Ampe Farms and Anderson Farms are joining forces to sponsor the Kids Pedal Tractor Pull in front of the L and L building starting at 1:30 p.m. and probably lasting at least an hour. Registration will start at 1 p.m. and throughout the event.

The Belgrade-Brooten-Elrosa Area Jaycees will again be hosting a Bean Bag tournament (two-person teams) that begins at 5:30 p.m.

The Saturday night street dance again features "Mixed Brew" on the big stage from 8:30 p.m. to 12:30 a.m. on main street - this street dance is sponsored by the Brother's Bar. Check out the embedded video to this web article to take in some of Mixed Brew's concert from August Fest 2017. They were a truly fabulous band!

The Belgrade Fire Relief Association will hold their raffle drawing at 9 p.m., with winners announced on main street during the street dance. A limited number of tickets are available, so please see a member of the Belgrade Fire and Rescue department to purchase (all cash prizes).

Finally, at 10 p.m. fireworks, sponsored by the Belgrade Lions Club and Precocious Pyrotechnics, will light up the sky over Belgrade to help celebrate August Fest.

Click here to view a photo album of 126 pictures from the 2017 August Fest grand parade, the royalty coronation and the street dance: https://bonanzavalley.smugmug.com/2017-BBEBonanza-Valley-area-events/Belgrade-August-Fest-III-0812.