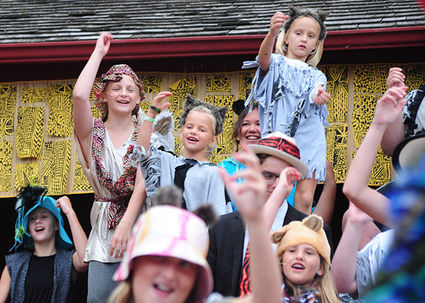 A scene from the final song of Jungle Book on August 1, 2018 in Terrace.

The Terrace Mill Children's Theatre presented "The Jungle Book" on Wednesday and Thursday, August 1 and 2 at the historic Terrace Mill. A cast of 33 youth performed in front of close to 300 visitors on opening night and then around 350 on the second night. The weather was cool, overcast and windy on Wednesday, but that did not dampen the enthusiasm of the cast as many first-time young theater camp-goers shined all night long.

The age-old tale included the favorite characters of Mowgli, Bagheera, Baloo, Kaa and many more as they went on adventure to defeat the evil Shere Khan!

The cast included youth from all over west central Minnesota as well as Breckenridge and Delano. This completed the 19th season of the summer theater camp in Terrace.