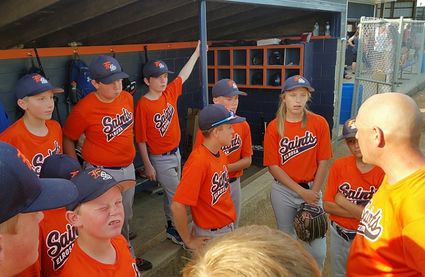 The Saints huddle in the dugout with Coach Van Beck prior to taking the field in the SCL championship game on July 29 in Elrosa.

On Sunday, July 29, the Elrosa Saints Little Dipper baseball team squared off with New Munich in their sixth straight appearance in the Stearns County League championship game. After the first inning was in the book, the Saints held a 10-0 lead. Below is video from the bottom half of that inning.

A game recap story and photos, plus a business-sponsored team color photo page, appeared in the August 2 issue of the Bonanza Valley Voice newspaper. Elrosa-area merchants are to be thanked for their support of the Elrosa baseball program and also this newspaper!

(HD video) The Saints pile on 10 runs against New Munich in the bottom of the first inning on July 29.