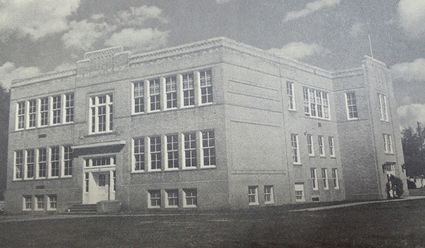 The Brooten school building in the late 1940s. At the time, this building housed grades 1 to 12.

*Note: this post will have political overtones. Apologies in advance. This is marked as opinion.

It pains the Bonanza Valley Voice to see the rapid pace at which members of modern U.S. society forget our past and the great sacrifices our forefathers endured to build America into the great nation we are today. To learn story after story of elder seniors whose families did "anything and everything" it took, every ounce of inner and outer mental and physical strength, to endure the endless struggles of the farm economy troubles of the 1920s, the Great Depression and Dust Bowl of the 1930s and then World War II in the 1940s...then set that as a backdrop to modern day where what we will dub the "entitlement syndrome" has gotten out of control. It is pervasive and stretches from generation to generation in 2018.

How did we get here, just a few generations removed from the era where families with 5, 6, 7, 8 or more children did anything and everything that was required of them to have clothes, food and shelter? Yes, soup kitchens with long lines of needy people existed in that aforementioned era. Yes, this country had homeless people in that period as well. At the same time, land barons and giant corporations existed with super wealthy individuals who were all but totally insulated from the struggles of the working class. Yet our country survived. We argued, protested, voted for and against opposing political parties and still went about our day-to-day business without screaming and shouting at one another about how "difficult and unfair modern life is today" ... We even came out of World War II with a full head of steam and a new generation of young families - the Baby Boomers - then transformed the nation from what we saw in 1940 to what we had in the last half of the 20th century. 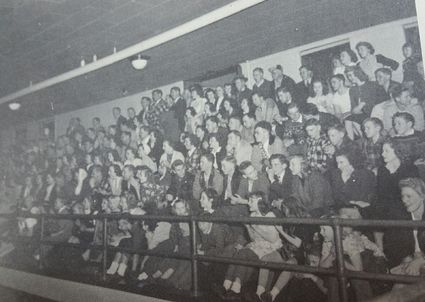 A view of the balcony in the Brooten high school in the late 1940s during a high school basketball game.

Let's go back to December 1942 to approximately the first December issue of the Brooten Review newspaper. It has a news article with the headline "Basketball practice" which gives a thorough list of the members of the 1942-1943 Brooten Buccaneers basketball team, beginning with a group of seventh graders of Charles Sagedahl, Lemoine Skaalrud and Orville Engel. Then eighth grader Vernon Marthaler. Followed by freshmen Lyle Huseth and Sidney Sagedahl. Sophomores numbered seven, including Myren Larson, Augie Odell, Levan Gilbertson, Gerald Nelson, Max Mitchell, Edward Rogers and Roger Halvorson. The lone junior was LeRoy Halvorson. The list had no seniors, although the article said, "The first call for practice was issued last Thursday. Several others are expected to come out within the next week or two."

And finally, this column's punch line. The article closes by saying, "A complete schedule of games will be published as soon as it is definitively decided whether or not it will be wise to continue such meets with the rubber shortage and gas rationing as major problems."

Can you imagine a rubber shortage or gas rationing today? Would modern society screech to a halt under those conditions?