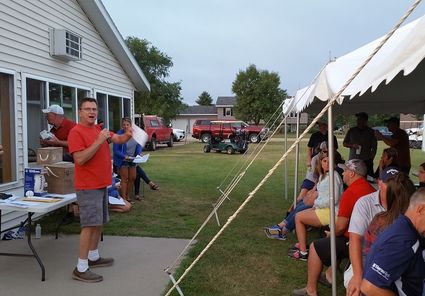 Scott Jacobson in action as auctioneer during the Jaguar Open on August 24 in Brooten.

The second annual Belgrade-Brooten-Elrosa Jaguar Open golf tournament was a resounding success at Prairie View Golf Course on Friday, August 24. A total of 21 teams competed, and 18 local businesses who paid corporate sponsorships highlighted a long list of locally-based support for what is one of the main fundraising events at B-B-E. Funds from this event help pay for a long list of extra- and co-curricular activities that receive support above and beyond what comes from the school's general education budget. This can be, but is not limited to, things like field trips, technology needs, student activity groups and equipment upgrades for extra-curriculars.

(VIDEO) Scott Jacobson calls the live auction that took place as dusk settled and the Jaguar Open came to a close.

The Christianson and Associates, PLLP team earned first place with a score of 56. They were followed by the runner-up team called Belgrade Redmen, who shot a 59. The Belgrade Redmen team was composed of former Belgrade Redmen football players Kevin Weller, Terry Peterson, Mark Weller and Roger Lindahl. Photos and more coverage of the Jaguar Open will be published in the August 30 issue of the Bonanza Valley Voice newspaper.

Make plans now to be a part of the fourth annual B-B-E Color FUND Run on Wednesday, October 3 during Homecoming week. Additional information will be published in upcoming issues of the Bonanza Valley Voice newspaper.