Celebration across the newspaper industry 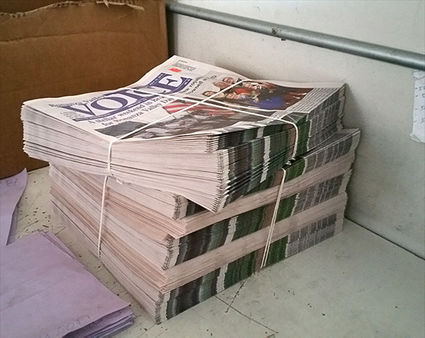 A large bundle of newspapers for the July 19 issue that is destined for the Belgrade Post Office (over 370 papers) is tied together and ready for transport at the printing press.

The day August 29, 2018 brought terrific news for the U.S. newspaper industry. The full effect of the news won't be known for a couple more months, but what we do know is something to be truly grateful for.

A paper tariff added in January to Canadian paper used for news print will completely go away in the coming weeks. The tariff was pushed on behalf of a Wall Street hedge fund that owns North Pacific Paper Company (NORPAC) in Washington State.

The result was a 40-plus percent increase in the cost of paper in the early months of 2018. Just as damaging as the increased prices was the uncertainty of how long the tariff would be in effect. Newspaper publishers were warned the tariff would likely last into this fall and possibly longer depending on how the International Trade Commission (ITC) would view the tariff.

Earlier in August it was announced that the ITC would hold a hearing on the paper tariff on September 17. The waiting game continued for newspaper publishers.

Then on Wednesday this week (August 29), word came down from the National Newspaper Association that the ITC delivered its verdict early. The news was tremendous: the tariffs would be eliminated altogether!

Susan Rowell, president of the National Newspaper Association and publisher of the Lancaster News in South Carolina, said in a news release, "We are immensely gratified today by the International Trade Commission's vote not to impose permanent tariffs upon the North American newsprint supply. The paper markets serving community newspapers can soon begin to move back to market pricing without the heavy hand of government imposing taxes upon the primary suppliers of newsprint."

The ITC gave a unanimous 5-0 vote to discontinue the tariffs, and it will take a couple months for the preliminary tariffs to be unwound and credits to be issued back to those companies who had paid duties at the border since last January. But it is an enormous relief to the industry know that the ITC does not find a basis for continuing sanctions.

Rowell added, "Our efforts to educate the commission about the realities of today's printing and publishing world were part of a large coalition of industries, led by the News Media Alliance and Resolute Inc., which supplies much of the U.S.-produced newsprint. The leadership of the law firm Covington and Burling and contributions of time and talent by so many publishers, editors, communicators of all sorts, and members of the public who joined a petition against the tariffs were all contributors to today's result. We are particularly grateful to Sens. Susan Collins and Angus King of Maine, and Rep. Kristi Noem of South Dakota, and all of their co-sponsors for introducing the PRINT Act of 2018 in support of our views."

(VIDEO) The Bonanza Valley Voice newspaper goes to press with the February 11, 2016 issue at its printing press.

Because of increased news print costs, the Bonanza Valley Voice has cut back on page count on a consistent and near-weekly basis for the first eight months of 2018. The elimination of the paper tariffs has completely changed the outlook for the newspaper as we move into the fall. It has given a rare boost in the arm and will help this newspaper become better and stronger as we now fight simply the very powerful forces of the market without the added burden of government heavy-handedness. Our subscriber count hovers around 1,525, and we are poised to inch that number higher as we pull out all the stops to provide hometown news coverage to the 11 communities of our coverage area: Norway Lake, Sunburg, Terrace, Sedan, Grove Lake, Brooten, Padua, Elrosa, Belgrade, Regal and Georgeville.

To our subscribers, readers and the loyal businesses who advertise with us: thank you for your support! This newspaper would not exist without you.