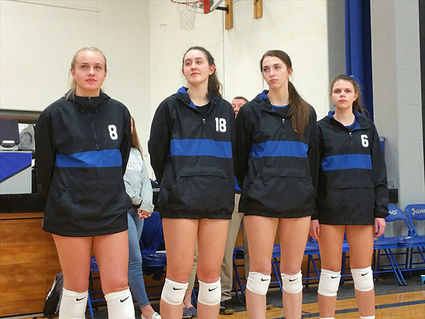 The Belgrade-Brooten-Elrosa Jaguars volleyball team held Senior Night and recognized the four seniors who have led the team to their best regular season since the 2012 season, when they took a 22-7 record into the Sub-Section 5A-South playoffs.

(HD VIDEO) The senior night recognition is held prior to pre-match warmups; and in the end of the clip, the Jaguars run out of the "tunnel" in front of their adoring fans.

Head coach Kevin Weller provided a fitting tribute to seniors Ally Gruber, Katherine Mastey, Nicole Thonvold and Emily Knight prior to pre-match drills on Monday, October 22. The Jaguars were set to host Swanville in the last match of the regular season. After Coach Weller spoke, the underclassmen on the squad gave gifts to each of the four seniors. Following that touching, hug-filled moment, the moms of the four seniors did the same with a presentation of gifts and an assortment of hugs for Nicole Thonvold, Ally Gruber, Katherine Mastey and Emily Knight.

The Jaguars proceeded to defeat Swanville to improve to 22-4 overall as they gear up for the Sub-Section 5A-South playoffs. Next is a quarterfinal match on the home court on Friday, October 26 at 7 p.m. Further details will follow as they become available, including scheduling updates throughout the playoffs, at the Bonanza Valley Voice Jaguars Sports blog: http://bbejaguars.blogspot.com.