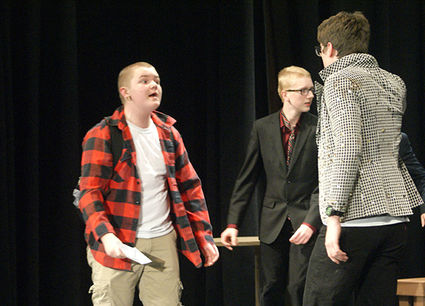 Billy Kopecki, played by Billy Tensen, shouts at Josh Baskin, played by Jesse Westaby, during a scene from 'Big, The Musical' on Nov. 16, 2018.

They were simply marvelous.

A cast of 19 Belgrade-Brooten-Elrosa drama students put on a spellbinding performance for opening night of "Big, The Musical" on Friday, November 16. In spite of the large number of young cast members, they absolutely nailed it! Plus, viewers can expect the next two shows to get even better.

Adding to the night's excitement was having a near-capacity audience on hand for the first of three shows this weekend on the B-B-E high school theater stage. (Note: to get a brief glimpse of the talent on stage, scroll below and watch the short video clip. It will be replaced on Saturday morning with a longer highlight reel.)

Two more shows will be performed for the public: Saturday at 7 p.m. and Sunday at 2 p.m. The musical is not one to miss out on, and on behalf of the cast and crew and the musical coaches, the Bonanza Valley Voice asks the public to share this review and pack the house on Saturday night and Sunday afternoon!

(HD video) A highlight reel, mostly from Act I, of 'Big, The Musical' as performed on the B-B-E high school theater stage on opening night, November 16, 2018.

"Big, The Musical" is shown in two acts and 14 scenes. The book is by John Weidman; music is by David Shire; and lyrics are by Richard Maltby. The show is based on the Twentieth Century Fox film of the same name that was released in 1987 starring Tom Hanks as the lead character "Josh"; along with other famous actors and actresses such as John Heard, Robert Loggia, Jon Lovitz and Debra Jo Rupp.

A synopsis of the musical says: the 1987 hit movie bursts on-stage in this vibrant, tuneful, funny and touching musical by three of Broadway's modern masters. When frustrated adolescent Josh Baskin wishes he were "big" and wakes up the next morning a 30 year-old man, he discovers there's much more to being an adult than he'd bargained for - and learns we must all grow up at our own pace, in our own time. A witty, moving, insightful book and a dazzling, energetic, heartfelt, contemporary score make this already-classic motion picture fantasy into an unforgettable theatrical experience.