Next Minnesota Agriculture Commissioner is appointed 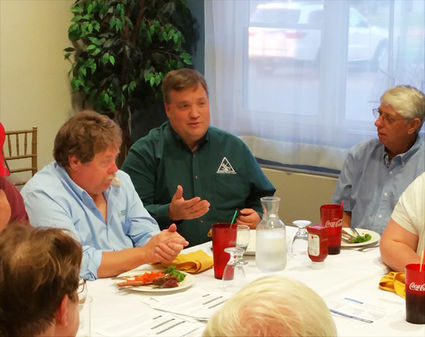 Thom Peterson (center) shown leading a discussion on rural issues during a local Farmers Union meeting in Glenwood on Sept. 7, 2017.

Today, Minnesota Gov.-elect Tim Walz announced his selection of Thom Petersen to serve in his cabinet as Commissioner of Agriculture.

Minnesota Farmers Union (MFU), a grassroots family farm advocacy organization, applauds the appointment of Petersen, who has served as the MFU Government Relations Director since 2002 and lives on a farm in Pine City with his wife and their children.

"Thom has been a strong advocate for Minnesota's family farmers at the Capitol throughout his tenure at MFU, and we know he'll continue to do so as Commissioner," MFU President Gary Wertish said in a press release. "Thom is well-versed in agricultural issues, policy and the impact that programs have on family farms and rural communities, and he's a capable leader who's fostered bipartisan cooperation among legislators.

"We thank Thom for all he has done for MFU members and look forward to continuing work with him."

MFU encourages the State Senate to confirm Petersen to his position.

Editor's note: in the main photo, Thom Peterson is shown leading a discussion of rural and agriculture-related issues at the annual Pope / Douglas / Grant counties Farmers Union convention. Peterson has been a great, long-time friend of the Bonanza Valley Voice publisher. We consider him to be a tremendous ally for rural Minnesota who will advocate for all of our state in St. Paul.