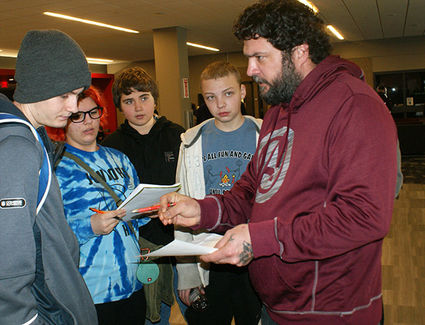 Robotics team mentor Robert Pattinson (right) reviews an idea with members of the team at the season kick-off event in Staples on January 5.

The Belgrade-Brooten-Elrosa Resistance Robotics team traveled to Central Lakes College in Staples on Saturday, January 5 as one of eight teams in attendance for the F.I.R.S.T. Robotics Kickoff event.

Nearly 100,000 high-school students on 3,790 teams at 146 venues around the globe joined the 2019 Kickoff via live broadcast out of Southern New Hampshire University in Manchester, NH. The kickoff was viewed at 146 venues in 29 countries. The 2019 season will have over 3,700 robotics teams competing.

FIRST Robotics competition kickoff marks the beginning of the design and build season. Teams have the opportunity to meet a “local” Kickoffs to compare notes, get ideas, make friends, find mentoring teams, learn the game, pick up the Kickoff Kit, and get geared up for the exciting competition season.

(HD VIDEO) This video features the kick-off to the 2019 robotics competition season.

F.I.R.S.T. (For Inspiration and Recognition of Science and Technology) combines the excitement of sports with the rigors of science and technology in the spirit of the “ultimate Sport for the Mind” according to co-founder Dean Kamen, an inventor who became famous for inventing the Segway scooter in 2001.

Along with B-B-E, teams from Morris Area, Upsala, Brainerd, Wadena-Deer Creek, Little Falls, Alexandria and Crosby-Ironton high schools were in attendance at the kickoff in Staples.

Below is video that features the overview of the competition with the moniker of "Destination: Deep Space" in honor of the upcoming 50th anniversary of the United States landing a man on the moon (July 1969). At the 19-minute mark in the video, the kick-off officially takes place with lift-off!