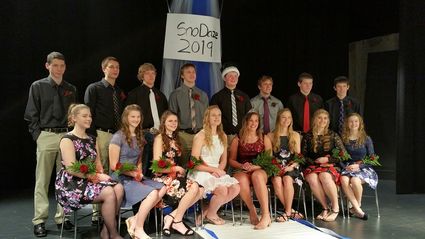 The royal court at the B-B-E Sno-Daze coronation.

The 30th Belgrade-Brooten-Elrosa Sno-Daze week was held February 11-16 with dress-up days over a five-day period, the King and Queen coronation plus a host of other activities culminating with a semi-formal dance on Saturday.

Seniors Riley Lenarz and Kenzie Thieschafer were crowned king and queen on Tuesday at the Sno-Daze coronation ceremony. Photos from the coronation appeared in the Feb. 14 issue of the Bonanza Valley Voice newspaper. Additional coverage will follow in the Feb. 21 issue.

Below, watch video with part of the games plus the crowning of the king and queen.