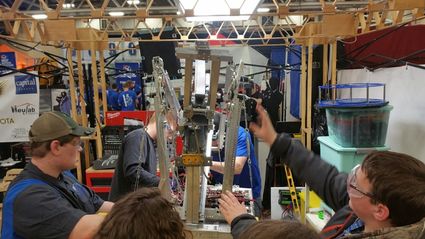 B-B-E robotics team members work on re-assembling their robot on Thursday, March 7 in Duluth on the practice day of the three-day regional competition.

The 11-member Belgrade-Brooten-Elrosa Resistance Robotics team just completed their best season since 2014. The eight-year old robotics program finished 19th out of 63 teams at the Lakes Superior Regional in Duluth. The three-day event, held March 6-9 at the Duluth Entertainment and Convention Center, held the title "Deep Space" in advance of the 50th anniversary of the U.S. manned moon landing coming in July of this year.

Additional coverage, taking up multiple pages of the newspaper, was published in the March 14 issue of the Bonanza Valley Voice. A collection of video clips is forthcoming on this web article; it will be posted as soon as possible.