'Glorious' to open Friday at The Little Theater in New London 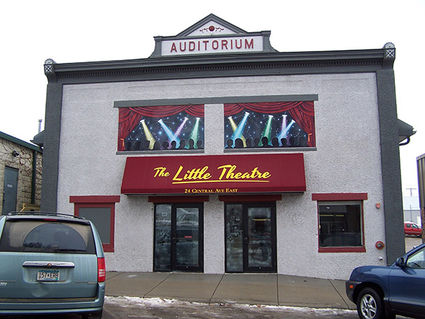 Crow River Players, Inc. is excited to announce their upcoming performances of 'Glorious', the True Story of Florence Foster Jenkins, the Worst Singer, at the Little Theatre in New London. The show is written by Peter Quilter and will be directed by 1996 Belgrade-Brooten-Elrosa graduate Thomas Rosengren. Show dates are April 5, 6, 7 and April 12, 13, 14.

Rosengren said in his Director's Notes sent to the media, "In 2016, Meryl Streep brought to life Florence Foster Jenkins, and since then, I've been eager to bring her to life on our local stage. I sought out this play because it is a great display of this woman's life and the lives of her friends. The theme of the story for me is 'Be Yourself! Believe in Yourself! And people may tell you that you can't sing, but they can't tell you that you didn't sing.' I encourage everyone to live their life like Florence did, that is to live it with truth and authenticity and to always be unapologetically who your heart tells you to be! Enjoy the show Glorious, The True Story of Florence Foster Jenkins', the worst opera singer in the world.

Below is a synopsis of the musical as written by Rosengren.

"This will be the first time we are enhancing a production with a movie screen as part of the set. A variety of images from the 1940’s will be used to take the audience back to Florence Foster Jenkins’ New York City. Included in the slideshow will be photos of the now demolished Seymour Hotel and The Ritz, as well as original pictures of Florence, St. Clair Bayfield, her companion, and Cosme McMoon, her pianist.

Since this is a true story, I have included Florence’s history as part of the synopsis.

Born Narcissa Florence Foster on July 19, 1868, in Wilkes-Barre, Pennsylvania to a wealthy family, Florence received music lessons as a child, and became a talented pianist. At seven years old, “Little Miss Foster” performed at society functions and gave a recital at the White House during the Rutherford B. Hayes administration. After she graduated from high school, she expressed a desire to go abroad to study music, but her wealthy father refused to pay the bill. That is when she eloped to Philadelphia with Frank Thornton Jenkins, a medical doctor, who became her husband (the two separated in 1902). After an injury to her arm ended her aspirations to be a pianist, she earned a living giving piano lessons.

She moved to New York City in 1900 and lived with her mother until she met British Shakespearean actor St. Clair Bayfield in 1909. When her father died later that year, Florence inherited a sizable trust, and decided to resume her musical career as a singer. Bayfield was her manager. She took voice lessons, joined dozens of wealthy New York City’s social clubs and became "chairman of music" for many of these organizations.

In 1912, when Florence was in her early forties, she began giving private vocal recitals. In 1917, she became founder and "President Soprano Hostess" of her own social organization, the Verdi Club. The club was dedicated to "fostering a love and patronage of Grand Opera in English". Its membership quickly grew to over 400, boasting honorary members which included Enrico Caruso. When her mother died in 1930, she used her inheritance to expand and promote her singing career. 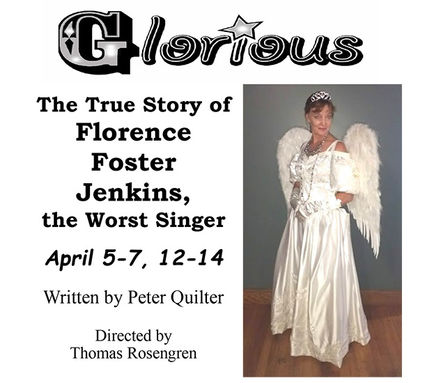 'Glorious' opens on Friday, April 5 at the Little Theatre in New London, MN.

The play takes place in the 1940’s, during the last years of Florence’s life when her career was at its height. In New York City the performer everyone wanted to see live was Florence Foster Jenkins. The enthusiastic soprano’s pitch was far from perfect, but her performances were sensational with over the top costumes and often veering off musical script to add her own special style of warbling. The joyous and eternally optimistic Florence paid little attention to her critics. In part because she had an extremely loyal and eccentric circle of friends that often protected her from her critics by clapping loudly to drown out the sound of the audience’s hysterical laughter. She hosted charity recitals and extravagant balls, recorded several albums and ultimately had her performance at Carnegie Hall.

This is a heart-warming story of a woman who believed in herself and never gave up on her dream. One of her famous quotes sums up the way she lived her life, “Some may say that I couldn’t sing, but no one can say I didn’t sing”.

To learn more about The Little Theatre, visit their website at http://www.newlondonlittletheatre.com.