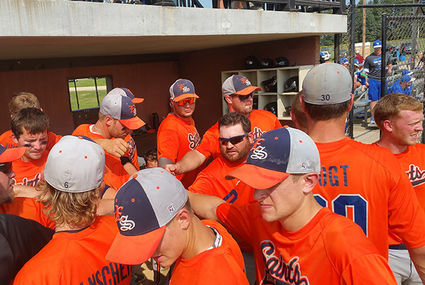 The Saints shown in their huddle at the Region 15C tournament in Farming on August 12, 2018. VOICE FILE PHOTO

The Elrosa Saints amateur baseball team got off to a terrific start to the 2019 season on Sunday, April 28. The Saints traveled to neighboring division rival Greenwald and came home with a 16-2, seven-inning win.

Elrosa throttled their way to a 9-0 first inning lead. With Kevin Kuefler earning a leadoff walk and Jackson Peter reaching on an error, Cody Eichers launched a shot over the fence for a three-run home run in his first at bat of the year. Elrosa ultimately had 14 batters in the first inning alone.

James Kuefler tacked on a three-run home run in the fifth inning to add to the offensive highlights.

Next for Elrosa is an exhibition game on Friday this week (May 3) against Dassel-Cokato at 7:30 p.m. at Saints Field. It is the home opener for the team. They are scheduled for a trip to Spring Hill to resume the Battle for the Keg rivalry on Sunday, May 5 with first pitch at 1:30 p.m. from Chargers Field.