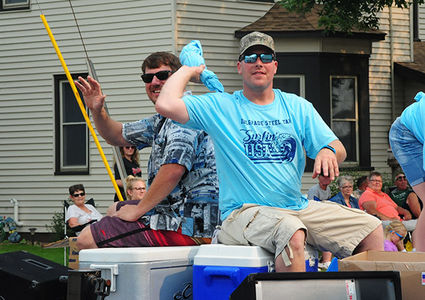 The annual Belgrade August Fest celebration is coming to Belgrade on August 7, 9 and 10.

The fun kicks off on Wednesday night this week with a free Concert in the Park, sponsored by the Belgrade Economic Development Authority (EDA) at 6:30 p.m. at the city park on South Highway 71. The featured live entertainment is Gig Noonan. The B-B-E Boy Scouts will be on hand selling hot dogs and refreshments.

Other activities run on Friday and Saturday, August 9 and 10. Details are published in this web article as well as in the August 8 issue of the Bonanza Valley Voice newspaper.

The Belgrade Fire and Rescue squad will hold their chicken dinner on Friday from 4:30 to 7:30 p.m. at the Belgrade V.F.W. Post 1825. Advanced tickets are $8 and can be purchased from any member, and tickets cost $9 at the door. Kensington Insurance Agency and Kensington Bank will have ice cream sundaes for everyone at the same time and location. Local entertainment will be featured on the semi trailer stage outside the V.F.W. during the chicken dinner.

The adult three-on-three basketball Austin Young Memorial tournament starts at 6 p.m. at the B-B-E high school. Registration begins at 5 p.m., and teams are encouraged to contact Dave Kaiser ahead of the tournament (651-263-4291).

The B-B-E Post Prom will hold the August Fest 5K Fun Run/Walk at 8:30 a.m. at the high school. Proceeds will go to supporting the Post Prom committee. Cost is $20, and water and snacks will be provided after the race. Contact Heather Goodall to register or with any questions: mamagoodall@icloud.com.

The Belgrade Reader’s Club will hold their quilt show at the municipal hall from 9 a.m. to 3 p.m.

The B-B-E Knights of Columbus will sell root beer floats from 9 a.m. to 3 p.m.

Kids’ games and inflatables will be operating from 10 a.m. to 3 p.m. They are sponsored by the Belgrade Lions Club, and proceeds will go towards the many groups assisting with the games. Prizes will be given out to all participating kids.

Jan Martin will host a quilter’s demonstration from 10 to 11 a.m. on the little stage near the municipal hall on main street. This is also sponsored by the Belgrade Reader’s Club.

The B-B-E wrestling club will operate their food stand booth on main street starting at 10:30 a.m. and operate until midnight.

The city planter winner, sponsored by the Rosebud Garden Club, will be announced on the little stage at 11 a.m.

The Slew Foot Band, sponsored by the Belgrade Commercial Club, plays at 1 p.m. performing on the little stage.

The kids’ pedal tractor pull, sponsored by Anderson Farms and Ampe Farms, takes place outside the L and L Building starting at 1:30 p.m. Registration opens at 1 p.m. and will run throughout the event. If there are three-year olds interested, they will have an exhibition pedal pull for that age of kids. Official divisions run for children ages four to 11.

The August Fest grand parade starts at 4 p.m. at the high school parking lot. It will then head west towards the Belgrade Nursing Home and then move back east to head down Lowery Avenue. To register, contact Leah Fernelius at 320-894-2334 or e-mail: fernpugs@icloud.com.

The Belgrade Royal Ambassador coronation takes place at 5:30 p.m. on the Big Stage in downtown Belgrade.

(HD VIDEO) Shown are the early units of the August Fest grand parade in Belgrade on Saturday, August 12, 2017.

At 6 p.m. or near the end of the Ambassador coronation program, the Belgrade August Fest photo contest winners will be announced. This is sponsored by HMD Photography. To enter, e-mail Heidi at info@hmdphoto.com before Friday night.

Saturday night’s feature entertainment is a second free street dance, this time sponsored by the Brother’s Bar. The band Mixed Brew will be on the big stage from 8:30 p.m. to 12:30 a.m.

At 9 p.m., the Belgrade Fire Relief Association will hold their raffle cash drawing.

Embedded in this web article is a video clip from the August Fest celebration in 2017.