Concert in the Park opens August Fest in Belgrade 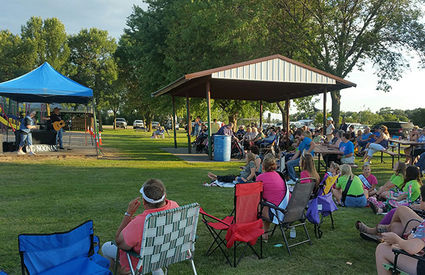 Conditions were picture perfect for the concert in the park in Belgrade on August 7.

A terrific crowd turned out under magnificent blue sky and beautiful conditions for the final summer outdoor Concert in the Park in Belgrade on Wednesday, August 7. The band Gig Noonan performed for an hour and a half. They were sponsored by the Belgrade Economic Development Authority (EDA) for the third and final concert in the summer series.

(HD VIDEO) Shown are the last few songs performed by Gig Noonan at the Belgrade August Fest concert in the park on August 7, 2019.

Watch video from their final songs in the embedded video in this web article.

Activities continue with August Fest on Friday and Saturday. Bonanza Valley Voice newspaper subscribers and readers can see the full schedule and accompanying story in the August 8 issue.