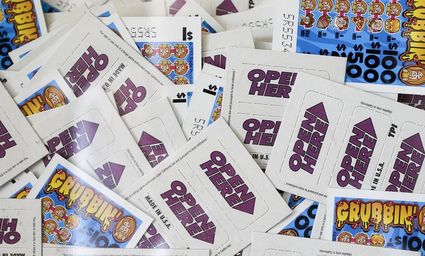 On Monday, August 19, 2019, the Bonanza Valley Voice learned that the Minnesota Gambling and Control Board (GCB) has closed its case on the Brooten Commercial Club's charitable gambling license and related issues with missing money and missing reports. All further activity related to this matter has been conducted by the Minnesota Department of Public Safety, Alcohol and Gambling Enforcement Division. This division of DPS is a police organization.

The case is closed with GCB in part to shield former members of the group from financial liabilities topping $326,000 associated with the missing money and missing reports. Members include numerous businesses in the Brooten area as well as the city of Brooten (not a voting member) as well as the Belgrade-Brooten-Elrosa, Independent School District No. 2364.

On March 7, 2019, the Minnesota GCB issued a Compliance Review Report to the Brooten Commercial Club. The club's charitable gambling license No. 03575 had been under scrutiny by the GCB since November of 2018. Fiduciary shortcomings by management of the Brooten Commercial Club's gambling organization had been under audit by the Minnesota Department of Revenue (MN-DOR) since July of 2018. In November of 2018, GCB officials were given a heads up by MN-DOR officials about "major concerns" from over 120 missing un-played (new) pull tab game boxes. Also, MN-DOR stated that in excess of 50 pull tab games had been played, but according to records, cash proceeds from the boxes were never deposited into the Brooten Commercial Club's gambling account at the local bank.

In December of 2018, GCB officials conducted a physical inspection of the Brooten Commercial Club's storage unit in Brooten and could locate only 12 more of the missing games.

The March 2019 GCB compliance review report included four pages of findings which were released to 38 members of the Brooten Commercial Club during the first week of April. They are as follows.

Finding: the gambling manager does not provide sufficient supervision of the gambling operation [MN Statute 349.167, Subd. 1 and MN Rule 7861.0230, Subp. 8]. Example: during a phone conversation with Jana Zenner (club CEO) on December 11, 2018, it was determined that Michelle Halls (gambling manager) had stopped performing her duties and responsibilities as gambling manager for the last five months. A review of the organization's meeting minutes show that it was reported to membership "There is no official gambling report available at this time" at their September 10, 2018 meeting as well as meetings that followed in 2018 on October 8, November 13 and December 10.

*The organization has failed to file GCB reports dating back to July 2018.

*Schedule B2s have not been completed and submitted to the MN Department of Revenue. A "Schedule B2" is a lawful gambling report of barcoded charitable games played in the state of Minnesota.

*Pull-tab, tipboard and paddleticket inventory has not been verified and accounted for.

*Rent has not been paid to lessors (bar owners on whose premises the charitable gambling is conducted) since July 2018.

Corrective Action Required: in order for the organization to conduct its charitable gambling in a lawful manner, the gambling manager must actively supervise the following duties:

1. determining the product to be purchased and put into play;

2. reviewing and monitoring the conduct of games;

4. verifying all (cash) receipts and disbursements;

6. supervising all licensing and reporting requirements;

7. assuring compliance with all laws and rules related to lawful gambling;

8. assuring that illegal gambling is not conducted at any of the organization's premises;

9. attending a majority of the regular meetings of the organization.

Games may be missing from inventory

Finding: games purchased by the organization that have not yet been reported as played are missing from the organization's current inventory [MN Statute 349.19, Subd. 9a and MN Rule 7861.0320, Subp. 1C(7) and Subp. 18]. Example: during a routine MN Department of Revenue audit, it was discovered that inventory in excess of 100 games may be missing. The purchase date of these games range from May 2016 to December 2018 and include pull-tabs, paddletickets and tipboards.

The outcome of the MN Department of Revenue audit shows a $154,672 loss in net receipts due to (alleged) theft.

Note: the word "alleged" was added to this web article by the newspaper, although this word was not in that sentence in the report. Also, it should be noted that as of May 20 of this year, the Department of Revenue increased its figure for the amount of missing funds (dubbed "loss in net receipts") to $261,797.

GCB Reports not filed with Gambling Control Board

To date, no further GCB reports have been received.

Unsold raffle tickets not accounted for

Raffles may have been reported inaccurately

Finding: the organization did not accurately report the gross receipts, prizes paid, net receipts and/or cash long or short for raffles conducted [MN Statute 349.19, Subd. 1; MN Rule 7861.0310, Subp. 11; and MN Rule 7861.0320, Subp. 8]. Example: an LG820 Raffle Inventory and Sales Log was not maintained as part of the records for the B-B-E Post Prom raffle conducted in October 2018. Gross receipts, net receipts and prizes paid were unable to be verified.

An LG820 Raffle Inventory and Sales Log was not maintained as part of the records for a gun raffle conducted. A copy of the ticket and unsold tickets were not accounted for. Gross receipts, net receipts and prizes paid were unable to be verified.

An LG820 Raffle Inventory and Sales Log was not maintained as part of the records for the Prairie View Community Golf Course annual raffle conducted in February 2016. A copy of the ticket and unsold tickets were not accounted for. Gross receipts, net receipts and prizes paid were unable to be verified.

Finding: checks were not signed by two active members of the organization [MN Statute 349.19, Subd. 3 and MN Rule 7861.0320, Subp. 3B]. Examples given were two checks. The first check was dated May 8, 2018 and was written to "Cash" with no information in the memo line. The amount of this check was $807. The second check was dated August 1, 2018 and was written to the "City of Brooten" in the amount of $1,900. These funds were written to the city as receipts from the Miss Brooten Committee raffle that was conducted in July of 2018.

Note: the cover letter of the March 2019 GCB compliance review report stated the following disclosure, in italics for emphasis, "Data Privacy Notice: this report and any attachments will become public information when the post-compliance process, if required, has been completed. If no post-compliance is required, the report becomes public when issued to your organization. If your organization is referred to the Board's Compliance Review Group, the report will remain private until the issues are resolved through the informal or formal hearing process." 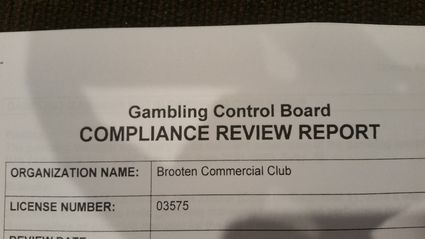 It should be noted that no post-compliance was required because the GCB reports had been turned over to law enforcement as part of the criminal investigation started by the Minnesota Department of Public Safety, Gambling Enforcement Division, in January 2019. The termination of the license was completed this summer. In the eyes of the MN Gambling Control Board, the Brooten Commercial Club case is closed. The GCB has no further comments or pieces of information to be released to the public. They have turned over all of their information to law enforcement.

Consequently, the Department of Public Safety's web page that outlines what happens in cases like these can be found at the following link: https://dps.mn.gov/divisions/age/gambling/Pages/default.aspx and then scrolling down to "responsibilities."