Tickets on sale in advance of the show in Glenwood 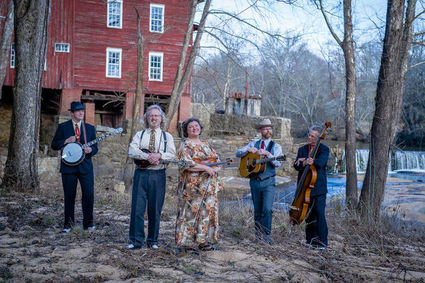 Monroe Crossing is coming to the Lee Paulson Stage at Central Square and Civic Center in Glenwood on Saturday, October 12. Tickets cost $30 in advance, and at the door $35. Children under 12 are admitted free with a paid adult.

From the group's website: Named in honor of Bill Monroe, "The Father of Bluegrass Music," Monroe Crossing dazzles audiences with an electrifying blend of classic bluegrass, bluegrass gospel, original bluegrass and even selections outside the bluegrass genre. Their superb musicianship and on-stage rapport have entertained audiences across the United States, Canada and Europe.

For nearly 20 years this Minnesota based band has averaged over 100 shows a year performing in intimate rooms, community theaters, major venues and outdoor festivals. They are favorites among bluegrass connoisseurs and non-bluegrass audiences alike. They love introducing newcomers to bluegrass music!

In 2007, Monroe Crossing was inducted into the Minnesota Music Hall of Fame. They have twice been selected to showcase at the annual World of Bluegrass convention hosted by the International Bluegrass Music Association (IBMA) and they have appeared twice at Carnegie Hall in New York City. In 2016, Monroe Crossing had the honor of being the first Minnesota bluegrass band to perform in South Korea.

(HD VIDEO) Brought together by their shared love for music legend Bill Monroe, Monroe Crossing has become a premiere bluegrass band in Minnesota.

Whether playing traditional bluegrass, original bluegrass or some surprising songs outside the bluegrass genre, Monroe Crossing is one of the most entertaining acts in bluegrass today! Source: http://www.monroecrossing.com/band.html. Their Twitter handle is @Monroe_Crossing.

Other upcoming concert nights include PowderFinger (Neil Young music tribute) on October 26 and Buddy Holly and Friends "Not Fade Away" on November 9. Also, don't forget to mark your calendars and purchase your tickets in advance for a great Christmas-season show of The Nutcracker performed by the Continental Ballet Co. on December 22.