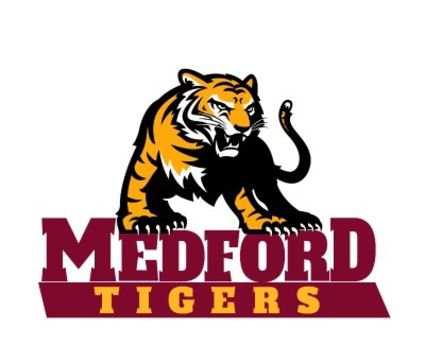 Different year, different story lines, but a familiar opponent for the Belgrade-Brooten-Elrosa volleyball team. The Jaguars (23-8) are gearing up for the Class 1A state volleyball quarterfinals to be played on Thursday, November 7 in St. Paul. They open state with Section 1A champion and No. 3-seeded Medford (24-8), runners-up in the Gopher Conference.

The Gopher Conference champion this fall was Waterville-Elysian-Morristown, who went 7-0 against conference foes. Medford finished 6-1 and lost 3-0 to W-E-M on their home court on September 26.

Cronin, Johnson and Kniefel are all very powerful hitters. Fun fact: Kniefel surpassed 1,000 career points in basketball back in February 2018 as a sophomore. Medford is in Class 2A in basketball. You can read about the night she eclipsed the 1,000 point mark by clicking here (short link): https://bit.ly/2NmB3ie. Last March in her junior year, Kniefel was named the Owatonna People's Press newspaper's female basketball Player of the Year while earning an 18.1 points-per-game scoring average. Medford had a rare perfect regular season and took a 23-0 record into the Section 2AA playoffs. They were upset in the sub-section semifinals, however, and finished 24-1. What makes that 23-0 regular season most incredible? Medford had just six wins total two years earlier in Kniefel's freshmen season. (They went 18-8 during her sophomore year.)

Back to the volleyball world...until last season, Medford had not even won a sub-section title. Last year they not only won a sub-section title, they won the Section 1A title to make state for the first time ever. They proceeded to win their first two state matches to get into the title match. It was a storybook season to be sure for the Tigers.

In 2012, they went 21-9-1 (6-1 Gopher Conference for second behind eventual state champion Bethlehem Academy)...that year they made the sub-section finals but lost 3-1 to B.A. in Rochester.

THE RISE OF THE TIGERS

Sometimes all it takes is one class; one group of special athletes; one astonishing postseason run and one town starving for a winner.

Sometimes all it takes is for the perfect whirlwind of events to churn together for the fortunes of an entire program to be transformed from mediocre to, well, something special.

This is exactly what is transpiring just 7.3 miles north of Owatonna on Interstate 35. Buoyed by an unforgettable and galvanizing three-week postseason run late last fall, the current Medford volleyball team has launched the program in a direction few people saw coming just 365 days ago. Not even the current staff and players could have imagined the magic would last as long as it did in 2018. The playoffs were less of a roller coaster and more of a train chugging downhill, steaming past great team after great team until finally coming to an halt in the state championship match against Minneota.

The experience was unforgettable and transcended the accomplishments of one single team. It elevated the Tigers squarely into the 2019 spotlight and naturally heightened the expectations of a squad that returns all but one regular starter and adds a high-impact transfer from Owatonna.

"I think it was stunning to all of us," head coach Missy Underdahl said of last season's Class A second place finish. "We hadn't been to (the section quarterfinals in Rochester) with this group of girls yet and last year we wanted to make it to Rochester, and then we won; and then we won again; and now we are in the championship match. I knew maybe it would be tough and then we won, and it felt like a dream. Someone pinch me."

Despite a terrific regular season that included 23 victories, the Tigers entered the 2018 postseason flying squarely under the radar and out of the consciousness of the greater Class A volleyball landscape. In fact, few would have been shocked if the Tigers would have bowed out in the section semifinals against perennial state powerhouse, Faribault Bethlehem Academy.

Cruising to a its second 3-0 victory over the Cardinals in a three-week span, senior Izzy Reuvers said the one-sided victory against their geographic rival on the postseason stage served a palpable turning point for a team that was gaining confidence and momentum after virtually every point.

"Definitely," Reuvers said when asked if beating Bethlehem Academy was like striding over a mental hurdle. "We knew they maybe had some issues in their program and that they were rebuilding, but this was our time and we stepped on the gas and went for it. I mean, they are a rival, so beating them at home (in the regular season) in three sets felt awesome and then we went to Civic Center and beat them again and it was like 'yes, we can do this.'"

After pulling off a back-and-forth 3-1 victory over highly-ranked Mabel-Canton in the section title match, the Tigers took their show on the road, packing up from the exciting atmosphere of the Rochester Civic Center to the grandest of stages of the Xcel Energy Center in St. Paul.

Opening the state tournament with a thrilling 3-2 win over the defending Class A champions, Mayer Lutheran, Medford officially arrived to the party. The media attention quickly caught fire as Underdahl and her players stood in front of the bright lights at the press conference with wide eyes and absorbed a firing-squad of questions with as much poise as they could possibly muster. It was clear that the team felt more comfortable on the court bashing the ball over the net than sitting in front of TV cameras and answering to eager reporters.

Another astonishing victory over third-ranked Belgrade-Brooten-Elrosa in the state semifinals and the Tigers were officially the darlings of the Minnesota volleyball world. Even in their season-ending defeat to the Vikings, they felt like they had accomplished something special, and that's because they had. No Medford girls team - in any sport - had ever made it to the state championship, and Underdahl wanted her team to appreciate exactly what they had accomplished as best as they possibly could.

"I hope it's a goal of every coach to get to state," said Underdahl, a 1996 Medford High School graduate. "And now we can say we did. No matter what place we finish this year - even if we don't make it to state - our community is so proud of these girls. They have already done something that Medford has never done in a girls sport. I just know the community and myself being an alum, when I played sports, I dreamed of going to state."

Fast-forward 10 months and the narrative has flipped. The team will no longer be able to sneak up on anyone and the days of playing as the cute, upstart underdog are officially vanquished. The lofty standard was set by last year's team and reinforced by the 2019 squad that features nine of last season's 12 total letter winners, several of which made all-conference, as well as Owatonna-transfer, Alyvia Johnson.

Returning players such as fourth-year starter, Emma Kniefel, said her team has no choice as the new season begins, they can either naively dodge the massive expectations, or accept the reality and move forward.

"For us seniors, we have been playing together for a long time, so we know this is our last year and we want to do something special," Kniefel said. "We want to go out with a bang. Everyone knows us, and wants to take us down. It doesn't change our mentality that much just because I have that competitive vibe that we want to beat everyone. We just have to keep level-headed, keep working hard and play our game."

Added Reuvers: "You think about it this year, it's going to be totally different. We are going to have teams coming to scout us. We are having reporters at our practices and matches, and that's awesome because you don't think about that stuff until you are going through it. It's amazing."

After digesting the loss Minneota and beginning the initial preparation stages for the new season, the Tigers knew the potential for 2019 would be at an all-time high based purely on quality of athletes returning to the team.

And then Johnson showed up.

Having already moved into the district, the former OHS all-conference outside-hitter and two-year starter officially transferred to the school and joined the team for the summer campaign, integrating herself with her new teammates during the twice-a-week schedule. With an obvious high-level of talent and experience at the Class AAA level, she became the perfect fit to replace the team's only all-league player lost to graduation, Rachael Luebbe. Johnson said the process of basically starting over for her senior year was initially unsettling, but was put at-ease as she got to know her new teammates and coaches.

With so many all-conference players returning, coupled with the addition of Johnson, the buzz around the program has grown louder and the state has taken notice. MSHSL veteran reporter, John Millea, showed up for the team's first practice of the season and wrote a lengthy feature story for the league's web site while the Minnesota Volleyball Coach's Association voted the Tigers second in Class A behind Kenyon-Wanamingo to start the season. Medford was also invited to the prestigious Breakdown USA Side Out Classic at Edina High School and will open the season against Minneota on Saturday, Aug. 24 as part of the multi-tiered event featuring elite teams from all levels of the state.

Next Saturday's high-profile match against the Vikings will serve as the first step in what the Tigers hope is a long journey that ends with a victory in the state championship match. They are one of a small handful of teams that can realistically say they have a shot of winning it all, and the prospect of earning Medford's first ever team state championship is almost overwhelming.

"I think it would mean the world to this community," Reuvers said. "The people have gone through the program have said: 'you are making a difference' and that warms my heart, makes me tear up because you don't think that a lot of people are watching you when you're in the games, but it's more than that."