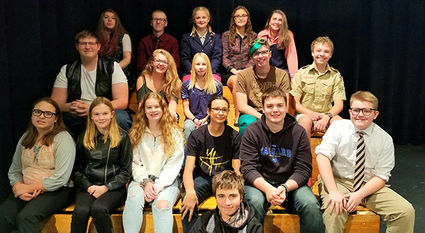 The cast and crew for the fall musical at B-B-E.

The Belgrade-Brooten-Elrosa high school Drama Department is excited to present the 25th annual Putnam County Spelling Bee on the school theater stage. Show dates are Friday, Saturday and Sunday this weekend, November 15, 16 and 17. The first two days have 7 p.m. evening shows, while the final performance on Sunday the 17th is a 2:30 p.m. matinee affair.

Musical director Cody Lenarz provided the following comments to the Bonanza Valley Voice, "The show is unlike anything we've done at B-B-E before, as members of the audience will actually get the chance to come on stage and compete with the cast for a chance to win the spelling bee! With this kind of audience interaction, every show is completely different and we'll never know what to expect!"

"The musical is a face paced, hilarious little show about a group of zany kids competing at their local spelling bee for the championship of a lifetime. As we meet the kids, we get to see personalities and learn how each of their lives led have them to this point. The spellers learn that winning comes in many different forms and that everyone has to grow up eventually."

Admission is $7 for adults and $4 for students/children. Tickets for each show will be sold at the door starting an hour before the performance. Come early to get your preferred seat!