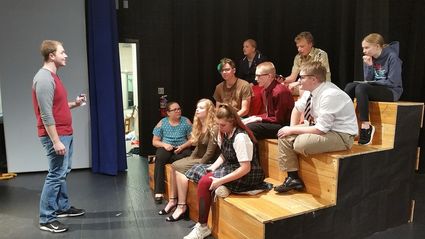 Director Cody Lenarz gives instructions to cast members of the musical at practice on November 11.

The fall musical at Belgrade-Brooten-Elrosa opens on Friday, November 15 at 7 p.m. Admission is $7 for adults and $4 for students.

Here's the synopsis of the musical from Wikipedia:

The 25th Annual Putnam County Spelling Bee is a musical comedy with music and lyrics by William Finn, a book by Rachel Sheinkin, conceived by Rebecca Feldman with additional material by Jay Reiss. The show centers on a fictional spelling bee set in a geographically ambiguous Putnam Valley Middle School. Six quirky adolescents compete in the Bee, run by three equally quirky grown-ups.

(VIDEO) Paige Klaphake talks about her role in the musical at the B-B-E theater stage during practice on November 11.

An unusual aspect of the show is that four real audience members are invited on stage to compete in the spelling bee alongside the six young characters. During the 2005 Tony Awards, former Presidential candidate Al Sharpton competed. Another amusing aspect of the show is that the official pronouncer, usually an improv comedian, provides ridiculous usage-in-a-sentence examples when asked to use words in a sentence. For instance, for the word "palaestra", he says, "Euripides said, 'What happens at the palaestra stays at the palaestra.'"[citation needed] At some shows, adult-only audiences (over age 16) are invited for "Parent-Teacher Conferences," also known as "adult night at the Bee." These performances are peppered with sexual references and profanity inspired by R-rated ad-libs made during rehearsals.

The Broadway cast album was released on May 31, 2005 and is available from Ghostlight Records, an imprint of Sh-K-Boom Records. The original Broadway cast recording was nominated for a Grammy Award.