'The feds are coming' 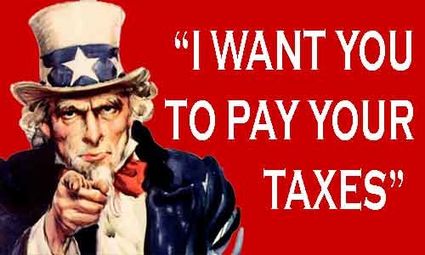 The "Tax Man Cometh" was the title for the February 17, 1991 Murder, She Wrote episode back in an era when Angela Lansbury graced millions of television sets across the United States. The plot of that episode revolved around a missing $2 million tax payment and one of Jessica's (Lansbury's character) old friends.

In the city of Brooten, phrase "The Tax Man Cometh" is not a work of fiction but rather full-blown reality for the Brooten Commercial Club and the 38 business members who are on the final list assembled for official state records for the 110-year old civic organization. This week, news broke that the Internal Revenue Service delivered through the BCC's accounting firm a bill that tops $34,000. This amount is due by Friday, November 15, 2019.

When looking at the BCC's federal tax statement, the amount due stems from the organization's now-defunct lawful, charitable gambling organization. Specifically, the BCC owes this money due to what is called "Unrelated Business Income Tax". The period of time the I.R.S. asserts this tax liability was generated ends on December 31, 2018.

According to Wikipedia, Unrelated Business Income Tax in the U.S. Internal Revenue Code is the tax on unrelated business income, which comes from an activity engaged in by a tax-exempt 26 USCA 501 organization that is not related to the tax-exempt purpose of that organization. Source: https://en.wikipedia.org/wiki/Unrelated_Business_Income_Tax.

For the BCC, the activity in question was what was the group's charitable gambling organization that handled around $1 million a year in its heyday but more recently tumbled to $387,348 for the calendar year 2017 according to state records.

How did this tax liability occur?

The answer to that question is not fully clear, but a growing tax and penalties bill with the Minnesota Department of Revenue service stems from numerous violations of the state's gambling manual job duties by former gambling manager Michelle Halls. News of those violations was passed on by the Minnesota Department of Revenue (MN-DOR) to the BCC in the spring of 2019. At that time, the MN-DOR had to complete the group's state tax returns due incomplete tax records left by Halls after her resignation as gambling manager effective December 31, 2018.

Based on records available to the BCC as well as other information passed on to the group from the Minnesota Gambling and Control Board and the Department of Revenue, Halls stopped performing her duties some time in 2018 overseeing the paperwork, book work, record-keeping and other duties outlined in the state's charitable gambling manual.

BCC monthly meeting records show that Halls failed to submit a monthly gambling report in eight of 12 months in 2018. No gambling report was submitted to the group at meetings in September, October, November and December of 2018.

*Update on November 15: additional information from the I.R.S. shows that quarterly federal tax payments that were owed for Unrelated Business Income tax were not paid in all four quarters of 2018.

*Update: as it stands as of November 14, it is unclear what the BCC will do with the growing tax liability. Because the organization has been set up as a corporation, the members of the group in 2018 are not liable.

This is a developing story. The November 21 issue of the Bonanza Valley Voice will have additional information for readers.