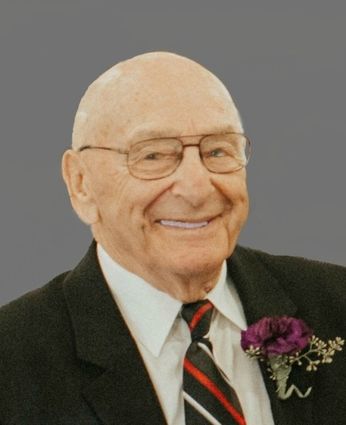 Herman A. Kampsen, 95, of Elrosa, died Monday, December 30, 2019, at the Belgrade Nursing Home in Belgrade. A Mass of Christian Burial will be 1:00 p.m. Saturday, January 4, 2020, at Saints Peter and Paul Catholic Church in Elrosa. Burial will be at a later date. A visitation will be held from 10:00 a.m. -1:00 p.m. on Saturday at the church. Services are entrusted to Johnson Funeral Home in Belgrade.

Herman Anthony Kampsen was born on March 4, 1924, in Elrosa, the son of Bernard and Katherine (Petermeier) Kampsen. He was raised on the family farm where he received his education in Elrosa. At the age of 17, Herman started his own farm in Elrosa.

On September 24, 1946, Herman was united in marriage to Delores Hess, at St Anthony's Catholic Church in Regal. This union was blessed with six boys and five girls. The family made their home on Herman's farm near Elrosa.

Herman was a member of Sts. Peter and Paul Catholic Church in Elrosa. He was active there in the choir. Herman loved singing. He was in many bands over the years most notably the Country Cruisers and Herman and the Rosetones. Herman was honored to sing with Johnny Cash at Cornstock Fest in 1989. Herman's other passion was baseball. He started playing when he was 14 and played until the age of 52. On September 18, 1982, Herman was inducted into the Minnesota Baseball Hall of Fame, and on June 1, 2007, he was inducted into the Elrosa Hall of Fame. Herman was a great husband, father, and grandfather. He loved spending time with family and friends and telling stories.