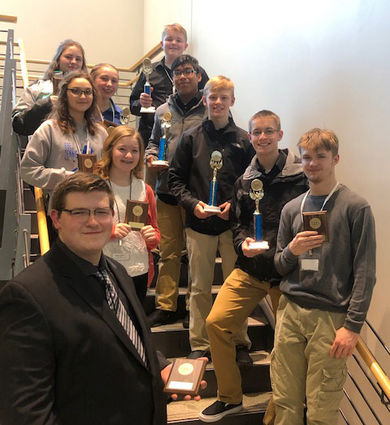 On January 22, the Belgrade-Brooten-Elrosa Business Professionals of America team had 15 students compete at the Region BPA competition at Alexandria Technical College.

At regions, B-B-E BPA students picked two or three competitions at the beginning of the school year and worked throughout the first semester to prepare for the regional competition. B-B-E students competed in a variety of business-type events this year. They took tests to show their knowledge on certain topics, wrote papers, and worked on projects that they eventually presented at the regional event.

BPA coach Matt Goodwin said, "The 15 students worked hard the last couple months to make sure they were ready for their competitions, and they performed very well. B-B-E now has 10 students qualified to advance to the state BPA competition. The students will now take the next month to fine tune their projects and get a little extra studying in."

The state BPA competition takes place on March 7, 8 and 9 in Minneapolis. Top finishers there qualify for advancement to the BPA National competition in April.

Additional information will be published in the February 13 issue of the Bonanza Valley Voice.