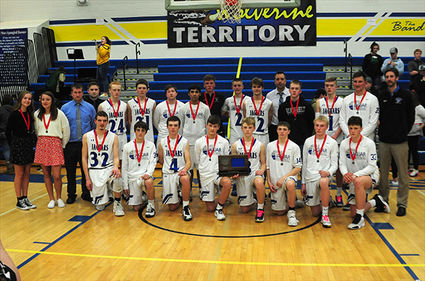 The B-B-E boys' basketball team gathers after the end of their 2019-2020 season at Wadena-Deer Creek high school on March 11.

The third-seeded Belgrade-Brooten-Elrosa Jaguars boys' basketball team put everything they had into their third straight appearance in a sub-section championship game and came up just short of advancing to a second straight section title bout.

In the final stage of the Sub-Section 5A-West finals on March 11, the Jaguars trailed 58-54 when top-seeded Nevis's junior forward Jack McNamee made two free throws with 1:35 on the clock. The Jaguars scored two more times in the game to cut it to a two-point deficit. Nevis (24-4) hung on for the win at Wadena-Deer Creek high school

Final: Nevis 61, B-B-E 58. It was a fantastic game featuring teams that each played just one senior all night. The Tigers were led by sophomore sharp-shooter Eddie Kramer's 20 points. Earlier this season, Kramer set a new Nevis school record by making 11 three-pointers in a game.

B-B-E was led by two players who each had 15 points, senior Jackson Peter and freshmen Kaden Pieper.

Nevis was playing in their fourth straight sub-section championship game. Their season was ended by Cromwell-Wright in the subsection finals in each of the last two seasons. In 2016-2017, Nevis won their sub-section before overcoming Browerville 55-52 in four overtimes in the Section 5A championship. At state that year, Nevis went 0-2 to finish 28-3.

This time around, the Tigers advanced to face Hinckley-Finlayson (14-14) for the Section 5A title, but that game ended up being cancelled due to the COVID-19 viral outbreak. The winter sports season was officially nixed as of the morning of Friday, March 13.

(HD VIDEO) The final three minutes of the sub-section boys' basketball championship game is featured in this video taken on March 11 at Wadena-Deer Creek high school.

The B-B-E Jaguars finish the season 14-15 overall, a remarkable ending after a tough 0-4 start in December. They will graduate just one senior, Jackson Peter, out of their top rotation of players.

To advance to the sub-section finals, the Jaguars opened the playoffs with a 54-53 win over No. 6-seeded Sebeka on B-B-E's home court on March 5. Two days later at W-DC high school, the Jaguars tangled with No. 2-seeded Pine River-Backus and came home with a convincing 54-36 semifinal win.

Additional coverage will follow in the March 19 issue of the Bonanza Valley Voice newspaper.