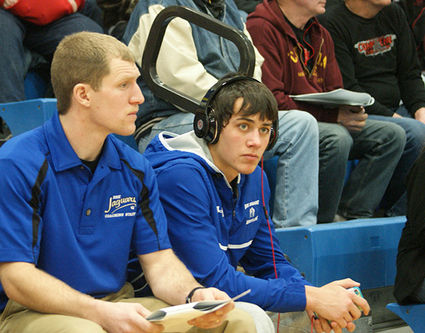 Josey Tensen prepares for a section wrestling match on February 21, 2015 at Kimball high school. Next to him is assistant wrestling coach Danny Borgerding, a 2006 B-B-E graduate.

Below is video of an incredibly heartfelt speech given by then-senior Josey Tensen with his fellow team tri-captains Kaleb Voss and Colby Schramel on Friday, February 20, 2015 at B-B-E high school. After thanking all the dedicated and loyal wrestling fans who supported them throughout a 12-win regular season where they finished second in the Central Minnesota Conference under first-year head coach Jack Mueller, Tensen encouraged everyone to come to Kimball the next day to watch the Jaguars compete for individual state tournament berths. Following the wrestlers speaking, captain Courtney Brandt spoke for the dance team and coach Lucy Lloyd spoke for the speech team.