Historical wall project making progress, yet more to do! 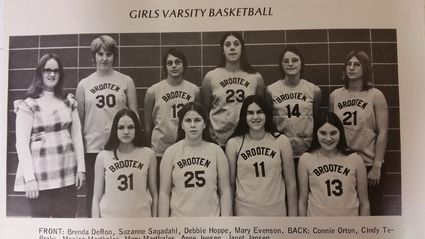 The historical wall project at Belgrade-Brooten-Elrosa is making progress, but more images are sought as the design phase approaches in March. Photos with historical value are sought from the public at B-B-E, and this can mean many things and take form in different ways. These images will be put together in large mural-type displays at the new entrance areas of the high school and elementary buildings.

One example: at the Belgrade museum, two school bells are on display from a former country school in the Georgeville area. These were school bells used by teachers in the country school era. A photograph was taken in the museum of these bells with a light description. That is an image that will be included in the historical wall display at B-B-E high school in Belgrade.

In Brooten, researches are currently looking for photos of the original school building in the village of Brooten. A "back up" image of this building can be found in the Brooten centennial book, but a copy of the original photograph would provide better quality. Following is a description of this school in the 1986 centennial book: "District No. 145, the Brooten school, officially was organized in 1890, and a building was erected at Lot 4, Block 1, Anderson and Roe Addition. May Johnson was the first teacher, and for the next eight years, one teacher did the work alone. It was a one-room structure with a front hall, much like all country schools at the time. After 1898, there became a healthy growth in Brooten, and it became necessary to increase the help for the teacher. The existing 24-by-40 foot building became very crowded."

Anyone with images or ideas on this extensive project is encouraged to contact The Bonanza Valley Voice by calling the office and leaving a message: 320-346-2400. Also, original photos can be dropped off at either school office, and once they are scanned, they will be returned.

Additional information was published in the February 25 issue of the Bonanza Valley Voice newspaper.