Jaguars are heading to the championship! 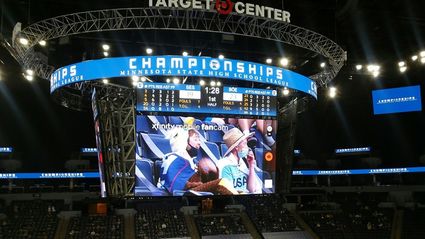 At halftime of the April 6 state semifinal game, B-B-E seniors Triston Guzier and Nevada Feucht are shown on the sky cam at Target Center.

The Belgrade-Brooten-Elrosa Jaguars girls’ basketball team has two state tournament wins under their belt with heart-stopping excitement the hallmark of a remarkable playoff run.

Last Tuesday at the Perham gymnasium dubbed "The Hive", the No. 4-ranked Jaguars defeated No. 18-ranked West Central Area 76-71 in the Class 1A state quarterfinals. The Section 6A champion WCA Knights were the No. 4 seed in the north half of Class 1A, while the Jaguars were the No. 1 seed.

B-B-E played at Target Center on Tuesday of this week (April 6) in the semifinals, where they took on previously-undefeated Sleepy Eye St. Mary's in a morning contest. After holding a 24-22 halftime lead, the Jaguars battled through a back-and-forth second half to win 51-50.

This week the Jaguars (23-1) faced undefeated Minneota (24-0) in the state championship. The game, also at Target Center, has a 1 p.m. tip-off on Friday this week (April 9). You can listen to the game on the local radio stations as well as tuning in to Channel 45.