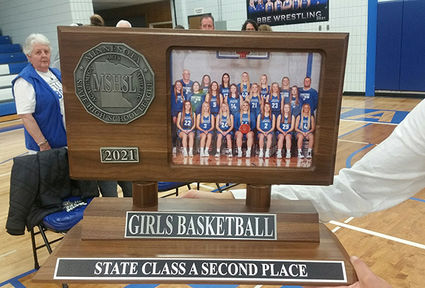 The Class 1A state runner-up trophy at B-B-E high school, shown following the welcome-home ceremony for the team on Friday, April 9.

In their first-ever appearance in the Class 1A state championship game during their second-ever trip to the state tournament, the No. 4-ranked (Minnesota Basketball News) Belgrade-Brooten-Elrosa Jaguars girls' basketball team is runner-up out of 140 teams in their division.

(HD VIDEO) Players run through pregame drills at Target Center prior to the Class 1A state championship game.