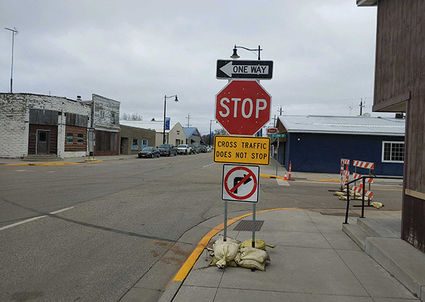 This is the stop sign located on the east side of Central Avenue in downtown Brooten.

Stop signs have been added to main street Brooten, right on Second Street, as of Thursday, April 15, 2021. The flow of traffic down Second Street (south of the KaDe Shack) has been established to flow west towards the school. Anyone traveling north and south on County Road 18 (Central Avenue) has to stop at the intersection between the KaDe Shack and the Brooten Post Office.

(HD VIDEO) Footage from across Brooten on Thursday, April 15.

Besides extensive utility work, new curbs, sidewalks and cross walks will be added at various locations along Highway 55. This will make the town considerably safer for pedestrian walking in future years.

The project preview article that outlined the full scope of the project was published in the April 8 printed issue of the Bonanza Valley Voice newspaper as well as the newspaper's April 8 set of web articles. The April 1 issue included a brief mention of the project right after flags were posted for underground utilities along Highway 55 in Brooten. Additional information will be published in the April 22 issue of the Voice newspaper print edition.