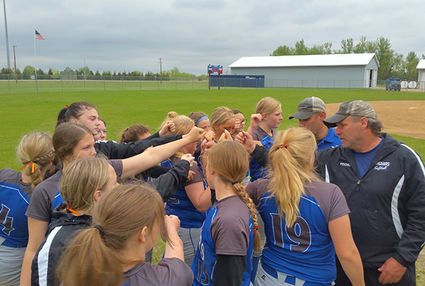 The Jaguars fastpitch team gather following the post-game huddle on Tuesday, May 18 when they defeated A-C-GC on the home diamond.

The Belgrade-Brooten-Elrosa Jaguars fastpitch team won a back-and-forth contest on the home field on Tuesday this week over Atwater-Cosmos-Grove City. After trailing 6-2 heading into the bottom of the second inning, the Jaguars won 17-7 in six innings.

On Monday this week in another home game, the Jaguars lost 9-2 to undefeated Browerville.

On Friday, May 21, the Jaguars travel to Upsala for a non-conference make-up game that was originally scheduled for April 9.

Next Tuesday, May 25, Melrose Area comes to Brooten for the regular season finale.

Read a full, feature story on the Jaguars in the May 20 issue of the Bonanza Valley Voice newspaper.

(HD VIDEO) Action from the bottom of the fifth inning on May 18 against A-C-GC.