And we could not be happier in Brooten - Church is TONIGHT! (Thursday) 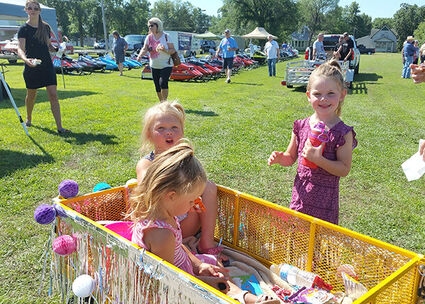 At the second annual BVD Vintage Snowmobile show on July 14, 2018; with grandchildren of Mark and Kara Kirckof gearing up for a full day of fun and excitement on Saturday of BVD weekend three years ago.

The 2021 Bonanza Valley Days celebration in Brooten is here! And the town of Brooten could not be happier. The highway project is done, highway stripes are going down, and soon the crosswalks will be painted on Highway 55. We received a very timely rain earlier this week, and the town is ready for the big "circus" to arrive!

UPDATE on Friday morning:The BVD 2021 Medallion was found! It was found by Emma Bast and Nathaniel Bast on Thursday evening at Memorial Park. All of the clues are still posted at city hall in downtown Brooten, and the additional note posted today helps tie them all together.

And now for the full description of Bonanza Valley Days 2021!...

Food, games, entertainment, music and more for all ages are what's in store to visitors of the BVD weekend! Posters are up in a saturation effort at area retail locations across Brooten, Belgrade and Elrosa plus area towns (mostly gas stations). Posters are also at the Elrosa and Belgrade Post Office buildings.

Another UPDATE on Friday morning: due to supply chain issues (thanks, COVID)...the mini donut and funnel cake stand will only be open on Saturday. They will not be able to open tonight for the Friday street dance on main street. I just talked to them, and they are marvelous people from Raymond who are excited to be in Brooten! Make sure to stop by on Saturday and say Hi to them!

The official BVD weekend kicks off with church in the park tonight (Thursday, July 8) at 7 p.m. Pastor Rick Krasky will be leading the non-denominational worship. That's followed by a concert by Belgrade-Brooten-Elrosa students at the park shelter.

Bonanza Valley Days T-shirt sales by Murphey's Printing are underway and are going well. You can read more about that and see a video of the T-shirts by clicking here = https://bit.ly/2TzckwV. Cost is $15 for adult shirts and $10 for kids shirts.

The BVD Medallion Hunt is also underway! The Medallion Hunt brings a prize of $50 in local gift certificates (to be determined) to the lucky winner. Clues are posted each morning at Brooten City Hall. Children are reminded to be mindful of their safety as they hunt around town and be respectful of all property. Clues are posted at 8 a.m. each morning at city hall. **UPDATE: Clue No. 3 was posted at 9 a.m. on Thursday.

The BVD Sand Volleyball tournament has a registration cost of $60, and payouts are determined on the number of teams entered. To register, call the Bonanza Valley Voice newspaper office (320-346-2400). All proceeds beyond the payouts will be donated to the B-B-E Blaze Junior Olympics volleyball program.