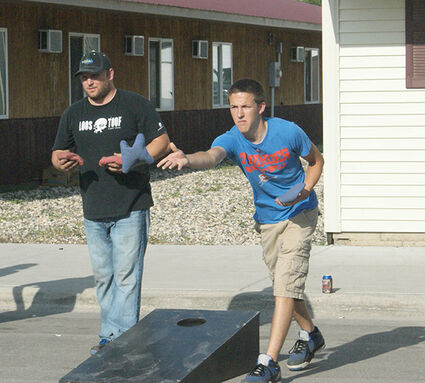 On July 11, 2015, Ben Tensen is shown in action at the BVD Bean Bag tournament, which was sponsored by the B-B-E Area Jaycees. Tensen was a 2014 graduate of B-B-E high school.

Here's a summary of information for the various Bonanza Valley Days sports offerings for the BVD weekend in Brooten: July 8 to July 11.

The BVD men's slowpitch softball tournament has 10 teams signed up as of July 8. Matt Schmitz is the coordinator. The tournament is on Saturday, July 10 starting at 9 a.m. at the city park on the west side of town.

The BVD Sand Volleyball tournament had seven teams signed up as of the morning of July 8. To sign up, you can call the Bonanza Valley Voice newspaper office at 320-346-2400. The goal is to have an eight-team tournament, but that can be flexible. Cost: the sand volleyball tournament cost is $60 per team with proceeds beyond the payouts going to the B-B-E Blaze Junior Olympics volleyball program. Payouts are tentatively set to go to the upper bracket and lower bracket in a fashion yet to be determined.

The BVD Bean Bag Tournament is planned with a 50 person maximum, or 25 teams. To register, be at downtown Brooten by City Hall at 5 p.m., and registration will take place from 5 to 5:30 p.m. with a cost of $10 per person ($20/team). It is sponsored by Rustic Stables Stylists, The Voice and Murphey's Printing. The tournament starts at 5:30 p.m on main street Brooten.

(VIDEO) Here's video from the BVD Youth Baseball tournament on July 13, 2012 at the Brooten city park; featuring members of the B-B-E 12-U baseball team in action against K-M-S. Future B-B-E graduate Jayden Miller (Class of 2018) was pitching for the Jaguars.

The BVD Walk/Run is on Saturday, July 10 at 8:30 a.m. whose proceeds help support the B-B-E Jaguars wrestling program. The Walk/Run will start promptly at 8:30 a.m. at the parking lot of St. Donatus Catholic church along Roe Street and Eastern Avenue. The cost is $15 per person, and registration can take place on site before it starts. The form required to fill out is not that long.

The Gary Fauskee Scholarship Golf tournament starts at 1 p.m. on Saturday, July 10 at Prairie View Community Golf Course with registration opening up at noon. Entry fee is $40 to include the golfing fee, half a cart and a scholarship contribution. As of Thursday, July 8 in the morning, the golf tournament has 11 teams signed up.

Thank you for your interest in the sports offered at BVD weekend in Brooten! It is wonderful to be active and do your very best to be physically fit and healthy.