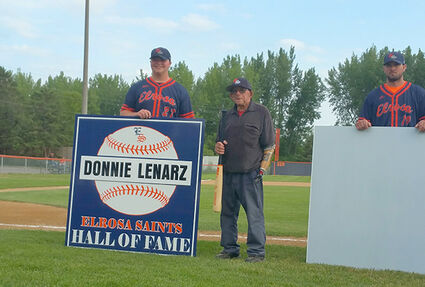 Riley Lenarz (left) holds the Hall of Fame banner for his grandfather Donnie Lenarz, shown next to him, at the HOF ceremony in Elrosa on July 9.

Dave Kampsen, an Elrosa native, played for the Saints from 1975 to 1995 and was a key member of the program's first amateur state tournament team in 1988.

(HD VIDEO) The Elrosa Hall of Fame ceremony on July 9.

Donnie Lenarz is also an Elrosa native who has been a dedicated and deeply devoted caretaker of Saints Field as well as all things Elrosa. His grandson Riley Lenarz is a member of the team.

The late Willard "Bucky" Buckentine (1933-1999) started his amateur baseball career in 1949 with the Arlington A's baseball team. He played second base and shortstop. His career spanned across four additional teams: Brooten, Greenwald, Belgrade and Elrosa. He also managed the Elrosa Saints for two seasons. He was a member of the Belgrade baseball team that played in the state tournament.

Below is video of the induction ceremony, which was held prior to Elrosa's amateur baseball game against Roscoe.

The last HOF ceremony in Elrosa was held in 2014.