It was a grand night for the Belgrade city park playground's grand opening! 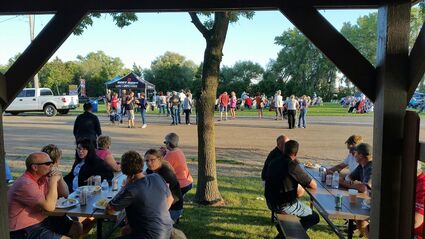 A view from the Belgrade city park shelter on Thursday, August 12, 2021 as Gig Noonan performed on the open lawn to the south.

The Belgrade August Fest had a terrific start to the three-day celebration this weekend. The evening was picture-perfect with mild summer temperatures, hardly any wind to speak of plus an overwhelming turnout of people of all ages.

On Thursday, August 12, the community turned out in droves with close to 400 meals served at the free community supper at the Belgrade city park. The evening also included a free community concert with Gig Noonan performing from 6 to a little after 8 p.m., and the new playground equipment was unveiled to the public after being installed last week. Free food (pulled pork sandwiches, beans, chips, beverages) was served by Queen Bee's Restaurant of Paynesville, sponsored by the Belgrade Co-op, Cenex and Goat Ridge Brewing Co.

Further coverage of the kick-off night to Belgrade August Fest will be published in the August 19 issue of the Bonanza Valley Voice newspaper. Included will be updated information on the fundraising efforts in Belgrade to pay off the new playground equipment and cost of installation.

Friday night (August 13) activities include the Belgrade Firemen's Chicken BBQ supper ($10 for adults at the door) starting at 4:30 p.m. and running until 7:30 p.m. At the same time, the friendly staff of Kensington Bank and Kensington Insurance will offer free ice cream sundaes for the public to enjoy. The local entertainment of ACDC DeeJay services will provide music during the chicken feed and ice cream social.

The Austin Young Memorial 3-on-3 basketball tournament adult division starts at 6 p.m. on Friday at the B-B-E high school (enter on the southwest corner of the building).

The evening concludes with a free street dance at the Belgrade V.F.W. featuring the band the Hit List. A new web article will be posted at The Voice website featuring The White Keys band. That band is the feature show on Saturday night on main street outside the Brother's Bar.