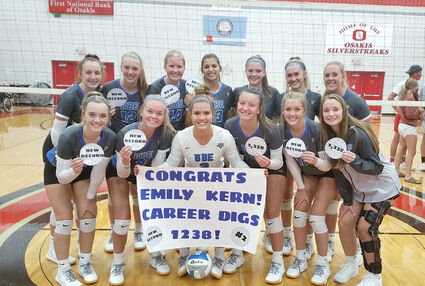 The 10th-ranked Belgrade-Brooten-Elrosa Jaguars volleyball team successfully opened the 2021 season with a 3-1 win at Osakis on Tuesday, August 31.

Early in game two, senior libero Emily Kern earned her seventh dig of the night, which broke the school career record for that category at B-B-E. The dig record stood for 12 years after it was broken by 2009 graduate Emily Roelike, an older sister of assistant coach Brittany Borgerding. Roelike graduated with 1,237 digs, and Kern currently has 1,255 career digs.

Tonight (Thursday, Sept. 2) the Jaguars travel to MACCRAY (Clara City)to take on the Wolverines in a non-conference match. The home opener follows that next Tuesday, September 7 against neighboring rival New London-Spicer.

(HD VIDEO) Featured is action from game four of the season opener on August 31 at Osakis high school, beginning while the teams were in a timeout.