A huge win for area law enforcement in Belgrade

Individual who allegedly stabbed another person is taken into custody 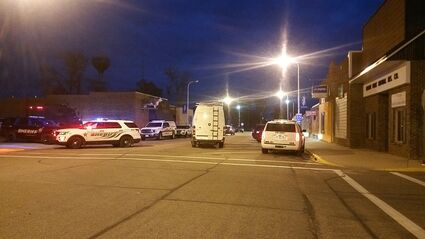 Over a dozen law enforcement vehicles were still on Main Street in downtown Belgrade as of 5:30 p.m. on Monday, November 1, as the situation that day was resolved and police presence was winding down.

Late in the afternoon of Monday, November 1, law enforcement personnel were able to take into custody an individual who allegedly had stabbed another person this morning. Law enforcement had been in negotiations with the individual throughout the afternoon in an attempt to prevent further injuries or any loss of life, and they were successful.

A video is below featuring a glimpse of Main Street in Belgrade on Monday night after the situation had been resolved.

Law enforcement has reported to The Voice on Monday night that they are working on a second press release that will include more information. This will become available as it is released.

Formal press release from the Stearns County Sheriff's Office at 20:00 on Monday:

On November 1, 2021 at approximately 10:10 a.m., the Belgrade/Brooten Police Department received a call requesting a welfare check at a residence in the 100 Block of Washburn Avenue in the City of Belgrade. The caller reported receiving a picture of a female that had been stabbed, who was inside the residence located on the 100 block of Washburn Avenue. Belgrade/Brooten Police along with the Stearns County Sheriff’s Office responded to the scene and set up a perimeter, contacted the occupants inside and began negotiations.

(HD VIDEO) A glimpse of downtown Belgrade on the evening of Monday, November 1, 2021.

As a result of negotiations, the female party was released from inside the residence. Glacial Ridge Ambulance and Life Link Air Ambulance provided medical treatment to the female. The female was transported by ambulance to Paynesville Hospital with non-life threatening stab wounds.

The Benton/Stearns SWAT Team was also been called to the scene. Negotiators continued their negotiation with the male party inside the residence. After several hours, the male party came outside and was taken into custody without incident at approximately 6 p.m.

The investigation is active and no further information will be released at this time. Investigators will coordinate with the Stearns County Attorney’s Office regarding formal charges.